Coming on the heels of the Wisconsin building code exemption, another conflict involving Amish appears to have been resolved last week in Heuvelton, New York (St. Lawrence County).

As reported in the Watertown Daily Times, area Amish have agreed to nearly double the amount of reflective tape used on their buggies (the group in question objects to using the orange SMV triangle; for a summary of the case, go here).

The agreement followed a summit of community leaders Sen. Ritchie arranged. A series of tests using a variety of reflective tapes was conducted to find out what would work best to improve visibility and safety. In the end, the leaders agreed that adding more reflective tape was the best solution. 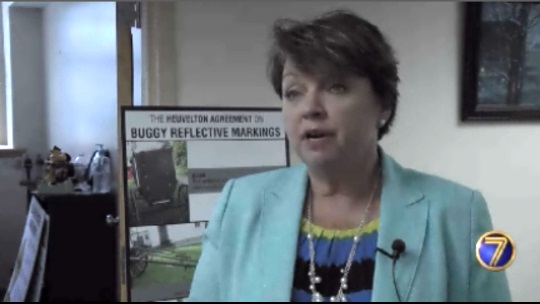 In addition to increasing the tape on the rear of the vehicle, tape will also be added to sides, the front, and the carriage shaft in order to alert drivers approaching from other directions.

Amish leaders also intend to urge others in the community to “upgrade” their red lantern lenses, as well as paint the interior of the lantern white to boost reflectivity. The additions and increase in amount of tape are voluntary.

After viewing the new tape arrangement, State Senator Patty Ritchie says that “you can spot them much better than you could” with the lesser amount, as she describes in the video below.

After hearing about the county’s desire that Amish adopt the orange SMV triangle, I predicted that would be a non-starter.

The Amish in St. Lawrence County are part of the Swartzentruber affiliation. Unlike most other Amish groups, the Swartzentruber Amish have long been staunchly against the triangle, and I don’t know of any that have ever conceded on the gaudy symbol.

I see this as a clever solution which can satisfy English demands rooted in the logic of safety and visibility, but which can also be more easily accepted by change-wary Amish–after all it’s simply doing more of what they already do. 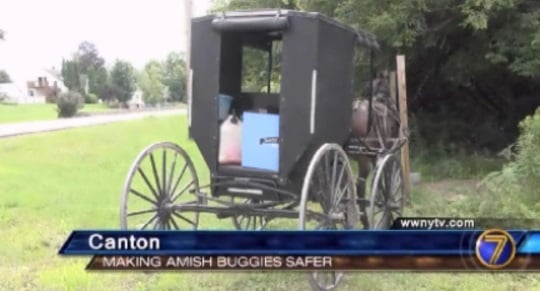 We’d have to ask them to be sure, but I’d guess the boldest part of the change from the Amish perspective is adding the tape to other areas of the buggy where it wasn’t previously used (the right side, as well as the carriage shaft)–more so than just increasing the amount of tape was increased.

Ironically, this may even turn out to be a safer solution than simply adding an orange triangle to the existing arrangement. As a point in the article states: “The increased rear markings will more completely trace buggies’ outlines, making them more easily recognizable after dark and improving visibility.”

Cory Anderson’s article on buggy safety markings also suggests that the triangle may even increase certain types of accidents due to something called the “moth effect”, with a tape-and-lantern combination possibly being the superior arrangement.

Even The Most Traditional Adapt

The Swartzentruber Amish are often held up here and elsewhere as examples of the most strict and rarely-bending segment of Amish society.

It’s good to recognize that with this example, even the most conservative Amish occasionally adapt to external pressures. Leaders’ willingness to change to preserve harmony with English neighbors, and hopefully improve safety while holding the line on the most important points, is commendable.

Did the concern for other, non-Amish people sway them? Did they simply choose the more palatable of the alternatives, in order to stave off pressure to take on the offensive SMV triangle? Whatever the answer might be, hopefully this step will help improve safety for both Amish buggy riders and their English neighbors. 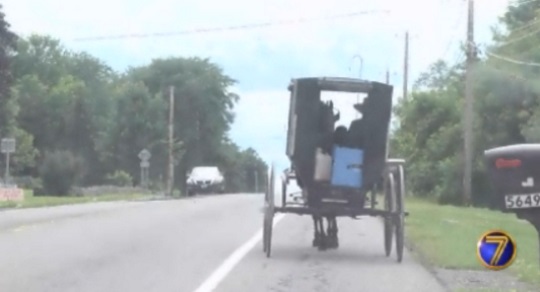 Finally, this change also raises the question of whether Swartzentruber Amish in other states will eventually adopt similar standards of increased reflective tape, following the example of the Heuvelton group.

If the changes show accidents to be reduced and visibility improved, perhaps authorities in other Swartzentruber areas will lobby for the increased markings. As of 2011, Swartzentruber Amish were found in over 40 settlements in 15 states.