Today we’ve got 6 winners of Ira Wagler’s Growing Up Amish.  If you missed the original interview, in which Ira discusses Amish life, family relationships and how he ended up in Lancaster County, you can read it here: Growing Up Amish interview.

I’ve tallied up all additional Facebook and blog entries.  If you commented more than once in the comments section that is fine, but I only counted the first one as a contest entry.  I used random.org to select winners.  This part is always exciting. 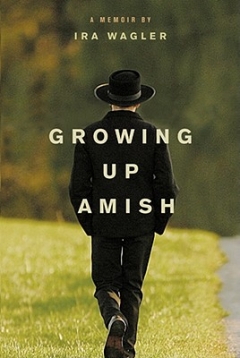 Congrats to the winners and thanks to all for participating.

Winners, send me your shipping address (ewesner(at)gmail(dot)com) and I’ll pass it along to Tyndale.  If you didn’t win, I hope you’ll pick up a copy of Ira’s book.  I think you’ll enjoy it.

Tyndale has also shared the first chapter of Growing Up Amish:

No one seems to remember exactly what was going on at the old home farm that day. Can’t say I blame them. There is no particular reason they should.

The one thing everybody does seem to agree on is that it was a typical late August day. Stiflingly oppressive heat. Barely a wisp of a breeze. Not a cloud in the sky. Not that I could confirm or deny any of it. I wasn’t there. At least not when the day dawned.

Some of my older siblings claim the threshers were there—though it was awfully late in the season for threshing oats. The menfolk were probably clattering about in the barn loft, sweeping the old wooden granary bins where the oats would be stored. And soon enough, the neighbors would have come rattling in with teams and wagons to haul the bundled oat sheaves. The threshing machine would have been there too, pulled by an ancient hybrid of a tractor and set up by the barn before the first loaded wagons came swaying in from the fields. Sweating in the dust and heat, the men would have been pitching the bundles onto the conveyor belt that fed the belt-driven threshing machine, where they would have been chewed up, separated, and deposited into the barn as oats and straw. The late harvest was under way.

I’m guessing some of the younger kids were picking strawberries in the field out by the old hickory tree. Seems late in the year for strawberries too, except for the Ever- bearing kind. Those plants produced from June until the fall frosts killed them. My father planted gobs of them every year to sell as produce—and to keep the children busy.

If Mom felt extra tired or stressed that morning, I’m sure she didn’t let on. After breakfast, she and my older sisters were probably doing what they always did: washing dishes, cleaning the house, and preparing the noon meal for everyone, which on that day would include the threshing crew.

But then, my sisters remember Mom abruptly stopping what she was doing. Stumbling to a wooden chair by the kitchen table, her face twitching with sudden spasms of pain.

“Go fetch your father from the barn,” she instructed Rosemary and Magdalena. And off they went.

“Mom said for you to come. Right away,” they gasped. Dad dropped his shovel and rushed to the house, the girls tagging anxiously behind him.

Mom was sitting there at the table, white faced. “It’s time,” she told him. He turned and dashed off to the neighbors’ place a quarter mile to the east. “English” people who had a car.

Moments later, my sisters stood silently by and watched as my mother—still sitting in her chair—was carried to the car by my father and one of the threshers. After easing the chair to the ground, Dad helped Mom shift into the backseat. Once everyone—Dad, Mom, and the English neighbor—was situated, they headed off to the hospital in nearby Tillsonburg.

Except for Rosemary and Magdalena, I doubt the rest of my siblings had any clue what was going on. They may have noticed that Mom had gained some weight lately and that she seemed tired a lot. But in those days, in that setting, no one spoke of such things. Especially to young children.

Dad didn’t return home until supper time, and when he did, Mom was not with him. My sisters remember the children gathering round.

“We have a little baby,” Dad announced, beaming. “A boy.”

They murmured excitedly. “A baby!”

“Mom is staying at the hospital tonight. We’ll go get her tomorrow.”

I’d like to think my birth was an important event, and to some extent, of course, it was. But in Amish families, the arrival of a new baby isn’t treated the same as it is in “English” families, where everyone fusses rapturously. For the Amish, where it’s not at all uncommon for families to have upwards of ten children, a new baby just isn’t that big a deal.

By the time I came along, my parents already had eight children. Four boys and four girls. An even number of each. I broke the tie. Number nine.

I’d like to think, too, that the choosing of my name was the source of much somber thought and measured consideration. Serious weighing of various possibilities and combinations. Perhaps even reciting the finalists aloud a time or two, just to make sure the name would fit in the flow of all the others in the family.

I’d like to think it was an important ritual. But again, I know better.

Earlier that summer, Dad had hired a strapping young man to help with the farmwork in return for room and board and a couple of bucks a day. He was Dad’s nephew and my cousin, probably around twenty years old. He was a fine, upstanding fellow, by all accounts. Hardworking, too. His name was Ira Stoll.

By the time Dad had fetched Mom and me from the Tillsonburg hospital the next day, someone—I suspect it was my two oldest sisters—had come up with the fateful suggestion: “Why don’t we name the new baby boy Ira?”

“After our cousin?” I can imagine Dad stroking his long black beard thoughtfully.

Mom, resting in bed, did not protest. In fact, I’m guessing she was even a little relieved. And so it was settled, in the most lackadaisical manner imaginable. With zero fanfare or fuss, I was saddled forever with the name Ira.

And thus began my life in the Old Order Amish community of Aylmer, Ontario.

You can find Growing Up Amish in many places, including bookstores and Amazon.