Energy companies are apparently losing enthusiasm for oil drilling in Ohio’s Utica Shale.  Oil in the Utica has proven more difficult than expected to extract, according to this article from Bloomberg:

U.S. drillers that set up rigs amid the rolling farmland of eastern Ohio on projections underground shale held $500 billion of oil are packing up.

Four of the biggest stakeholders in untapped deposits known as the Utica Shale have put up all or part of their acreage for sale, as prices fall by a third in some cases. Chesapeake Energy Corp. (CHK) of Oklahoma City, the biggest U.S. shale lease owner, last week offered up 94,200 acres (38,121 hectares). EnerVest Ltd. and Devon Energy Corp. (DVN) are selling as early results show lower production than their predictions.

“The results were somewhat disappointing,” said Philip Weiss, an analyst with Argus Research in New York. Early data show “it’s not as good as we thought it was going to be.”

I sensed that energy around hydraulic fracturing, aka fracking, had died down on my February trip to Holmes County.  I was told of how local landholders had banded together in landowners’ groups to create more leverage when dealing with the energy companies. 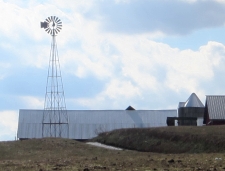 However at least one of the wells had not been as successful as hoped (the two locations I specifically heard of wells being drilled were the areas of Holmesville and Apple Creek).  Momentum for extraction in the area had sputtered over the previous half-year or so.  Supposedly the areas to the east, in Tuscarawas and Carroll Counties and beyond, continue to be more promising.

Gas is more accessible in the Utica, though “drillers frequently found the rock too dense and underground pressures insufficient to produce oil” (oil is more valuable and desired in the current market).  Does this mean an eventual end for fracking as an issue for Amish and others in the area?   Since much depends on technology and prices, perhaps not, though for the time being at least, “the rush to buy acreage has reversed.”