RUSSELLVILLE – A trial date has been set for 13 members of Auburn’s Amish community who have been cited for violating a local ordinance that requires them to clean up after their horses. 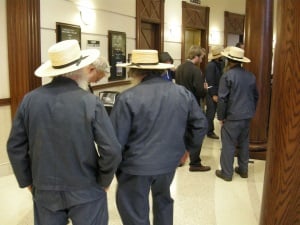 Authorities have accused the Amish defendants of running afoul of Auburn’s ordinance setting forth the need for large animals traveling within the city limits to be fitted with devices to catch their droppings.

The ordinance cites a need to promote public safety.

The Amish who live in Auburn are members of a conservative sect known as the Swartzentruber Amish, which rejects motor vehicles and most other modern technology and travels on horse-drawn buggies.

The Swartzentruber community decided that using the bags would violate the community’s religious standards, which has left its members at odds with local law.

You might remember the Amish from this Logan County community appearing in the news several years ago during an SMV safety triangle conflict which got wide national coverage.

Swartzentruber Amish in some communities reach an accommodation with authorities over their characteristically strict lifestyle, different in certain ways from other Amish.

If they can’t do that, they may leave for calmer pastures (as seen in Pennsylvania for example).


Or more rarely, as we’ve seen in the recent buggy safety changes being rolled out in one Ohio Swartzentruber community, they may actually change their ways to adapt.

But it doesn’t sound like that’s going to be happening in Logan County, KY.  There are 37 pending cases against the 13 Amish defendants. Defense attorney Travis Lock says he’ll be requesting 37 separate trials.