Illinois Amish Use Horsepower To Move Their Oldest-Known Home 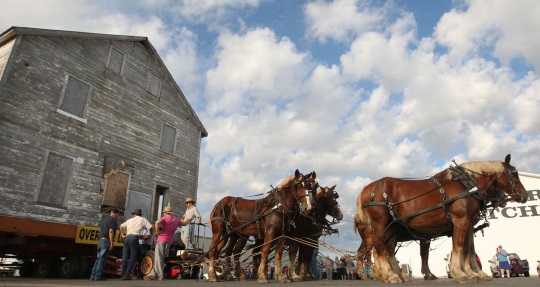 Amish in Illinois have made news by moving the oldest-known Amish home in the state, using the power of eight mighty Belgian horses.

Belgians are a common breed used by Amish for farm work. This past Tuesday morning they found themselves with the uncommon task of transporting a 150-year-old farm home–though it turns out they only did a small part of the job:

A team of eight hulking Belgian plow horses was hitched up to a trailer and, after a couple of false starts, began moving the circa-1866 Moses Yoder farmhouse at a surprisingly brisk clip-clop.

“This is my first house pull,” said Amish farmer Eldon Schrock, who helped supply the horses while his farming assistant Steven Hostetler controlled the reins. “But it’s not our first rodeo,” added Hostetler, who made handling the straining equine muscle look easy.

The horses only towed the two-story wood house a symbolic distance across the big parking lot near Yoder’s Kitchen restaurant, creating a poignant photo-op, before the more concentrated horsepower of a diesel truck took over.

The home’s destination was a location three miles away, where along with several other structures it will become part of the new Illinois Amish Museum and Heritage Center. This Amish-backed project will also provide a home for items previously housed at Rockome Gardens.

Amish move homes and structure often enough. Some homes, such as skid houses, are even designed to be disassembled and relocated (see Karen Johnson-Weiner’s photos of English helping Swartzentruber Amish move a skid home in New York).

In some cases, a community may even relocate a building through well-coordinated muscle power. You can see video of two examples of that at this post, or in the video below (foul language warning at 0:38):

Interestingly, Amish may even make a business of moving houses. At least that is what I discovered when perusing the Holmes County Amish directory when putting together this post on unusual Amish jobs several years ago.