A Follow-Up On The “Plain Parade”

An Amish friend who saw the title of the post last week had this to say: “Plain Parade – what an oxymoron”.

I think that is an astute observation. The quotation marks were meant to suggest the term be taken with a grain of salt. Especially, as noted in the original post, since the actual Amish participation seemed to be minimal. That said, he also predicts that “there will be an uptick in Plain voters” this election. 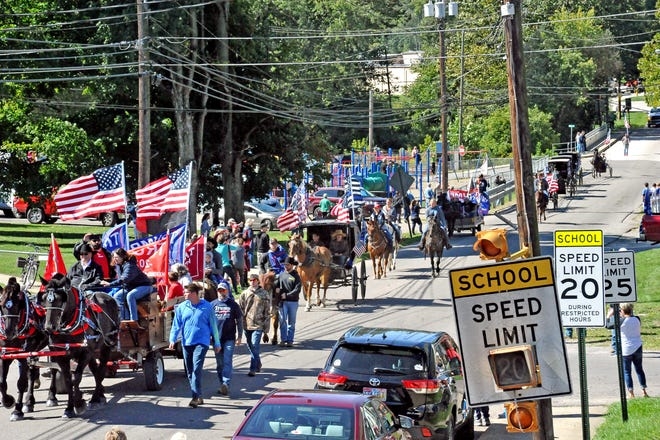 My main interest here is in the phenomenon of Amish participation in politics, as it’s not traditionally something they promote or engage in, outside of a minority. But as suggested, that could be eroding.

So concerning that aspect, the Wooster Daily Record did a nice follow-up report, getting some Amish and other local opinion on the parade, and politics in general, which provides further context.

I was told, and the paper also reports, that there was to be a second parade this past Saturday, but have not seen much of any news on how that turned out.

I’ve pulled some interesting excerpts from that article, and have added some additional information which I was able to gather below.

The article contains a number of comments from local observers. Here’s the first, a shop worker in Fredericksburg whose clientele is heavily Amish:

Adam Amstutz, an employee at Fredericksburg Square Market, frequently converses with members of the Amish community when they visit the business. At least 80% of his customers are Amish, he said.

Political conversations and a showing of support for Trump have become more frequent within the last year, Amstutz said.

Trump’s commitment to putting Americans back to work and his pro-life stance are appealing to Amish voters, he added.

“For a national election, I’ve never seen this type of (interest) ever in my life,” said Amstutz, a lifelong Fredericksburg resident. “… We’re not really that loud of a community. This year, you definitely see a lot more vocalization around here.”

Next, the Amish-raised county commissioner, and the director of the Amish & Mennonite Heritage Center:

Holmes County Commissioner Joe D. Miller, who left the Amish community at 18 years old, said he also has heard during one-on-one conversations with Amish individuals that there is an increase interest in participating in the 2020 election.

The economy also has an impact, he said. Tariffs Trump imposed on international imports have benefited the Amish community, Joe Miller believes. For example, he said, an Amish furniture maker has received a number of big orders from large corporations. Before the tariffs, Amish furniture makers couldn’t compete with Chinese companies that could fill orders cheaper, he said.

“I think a lot more Amish are excited about voting and will vote because of those values that the president has,” Miller said.

Marcus Yoder, director of the Amish and Mennonite Heritage Center and a leader in the Amish community, said there has been an increased awareness of the role of government for two primary reasons.

First, with smartphones and internet access, information is more accessible. Though some Amish may not use those technologies, they hear about happenings through people who visit their communities. Second, the coronavirus pandemic and restrictions have brought attention to state and national leadership, he said.

“When everything shut down, by nature you pay more attention to what is going on, and I think that has brought some heightened attention to the elections,” Yoder explained.

Kyle Kopko, co-author of an analysis of Plain voting in the 2004 election, had some input as well. He gives some context to the idea of a “separate people” voting:

Voting in a presidential election may be frowned upon in more conservative churches and is still considered controversial, he said. There has been a longstanding debate about voting in Old Order communities, which grows out of Anabaptist religious traditions, Kopko said.

“A lot of this goes back to the Gospel and Jesus noting that his kingdom is not of this world,” Kopko said. “His kingdom is in heaven and you as a believer ought to focus not on the worldly endeavors, but focus on being a citizen of God’s kingdom.”

Who are the Amish in the parade?

As far as who is actually participating in the parade, Kopko says this:

The Amish who have participated in Trump parades and rallies do not appear to be traditional Old Order Amish, Kopko said. The participants may be from a more progressive, New Order group or may be young adults on rumspringa who have not yet joined the church, he said.

This aligns with what I see in the video, and also what I was told by a local Amish person – that some of the buggies appear to be from the “New Order Tobe” group (not to be confused with the larger New Order group in Holmes County), and that one of those heavily involved is from the New Order Tobe. This group is a bit more progressive than the “regular” New Order, and is about 4 or 5 churches in size.

Also, I pointed out in the first post that there appeared to be at least one Swartzentruber buggy. My Amish source says this:

There are Swartzentruber shown in some of the pictures I have seen, but in the one you shared with me the Amish buggy passengers do not appear to be Swartzentrubers, though I’m baffled why they are driving a Swartzentruber buggy…. I’d love to know the story behind that!

Finally, this was an interesting bit from Kopko:

“Generally speaking, it’s hard to tell where this is all going,” Kopko said. “I think as a political strategy, reaching out to this group makes sense, but also results aren’t going to happen overnight. If this is successful, it’s going to take a number of years to be realized just because of culture, the different settlements.”

Amish comments on the parade

Finally, here are some Amish voices. Three of these are from the article, and one of these is the aforementioned Amish local. First, this is “Mr. Miller“, who attended the Oval Office meeting last December. Note his final line:

Though Miller said he is not participating in this weekend’s rally, he is not shy about his support for Trump.

Trump believes in the importance of law enforcement, Miller said, adding the Amish appreciate and value the protection and service local police and sheriff’s departments provide in their communities.

The desire to vote, Miller said, is not because of Trump. Many Amish are newspaper subscribers and disapprove of the violence and riots being reported, which has sparked an interest in voting, he said. Miller desires to vote for someone who is honest, keeps promises and stands for biblical principles, he said.

Gauging the true support of the local Amish community is difficult, little data is available. A representative from the Holmes County Board of Elections said the board does not keep track of the number of Amish who vote.

“I can’t speak for the whole Amish community, I can only speak for me,” Miller said. “I’m not a Democrat. I’m not a Republican. If we all turn to God, things would shape up real quick.”

Next, they were also able to find at least one Amish voter not supporting Trump (though that doesn’t necessarily mean he’s voting for Biden). His rationale for voting against the incumbent is of interest:

On the other hand, one leader in the Amish community, who did not want to be named, said he will participate in an election for the first time in November.

This election, featuring former Vice President Joe Biden and running mate Kamala Harris on the Democratic ticket, has been unprecedented and has galvanized the Amish community, sparking an interest to vote for either party, he said.

He will be among the Amish who vote against Republicans Trump and his running mate, Vice President Mike Pence out of concern for the uproar support for Trump has caused — such as noisy parades and rallies where buggies meant to represent the Amish community are decorated with American or Trump flags, which is not the Amish way, he said.

It sounds almost like a “protest vote” against the idea of some Amish people getting too tied up with political demonstrations.

In a somewhat similar vein, an Amish friend in Holmes County had this to say:

I’m extremely disappointed and offended there are Amish people involved in this and appalled at a group of Amish men who sent voter registration forms out to Amish homes urging them to vote for Trump. I’ve never seen an election that the Amish talked so much about! Though I’ve not heard of any Amish sermons directly endorsing Trump, we hear vague reports of some that came close and also Mennonite churches who strongly get involved.

Finally, from the article again, a business and church leader in the community. I do believe most Amish views would align with his final line:

Ernie Hershberger, owner of Homestead Furniture and an Amish minister, said Amish typically do not actively participate in government but rather pray silently that leadership will lead with Christian values.

The Amish believe in prayer and being a light to the community, he said. It starts with the family, then the church and then the nation, Hershberger said.

Placing political paraphernalia on a buggy or attending a rally does not align with traditional Amish values, he noted.

“We would much rather as a community stay out of the limelight and do our duty of showing love and practicing our conscientious objector status,” Hershberger said.

Note: Comments, as always, are welcome, but please keep them civil and on-topic.