Several readers shared this somewhat surprising story with me. Here’s a video showing a parade in support of President Trump, which took place Saturday in and outside of Fredericksburg, Ohio:

This is in the Holmes/Wayne County settlement. There were a reported 500 people who gathered in this small town lying just over the county border.

If you watch the video, you’ll see it is a mix of Amish buggies, other horse-drawn transport, some people riding animals, including two beasts with rather large horns(!) and drivers in motor vehicles. Most of the vehicles, including the Amish buggies, are bedecked with American flags and Trump signs.

Actual Amish people appear to make up a minority of the paraders. So how “Plain” this parade actually is, is up for debate. At least a couple of the buggies look like Swartzentruber Amish vehicles. There is a large Swartzentruber population not far from Fredericksburg. 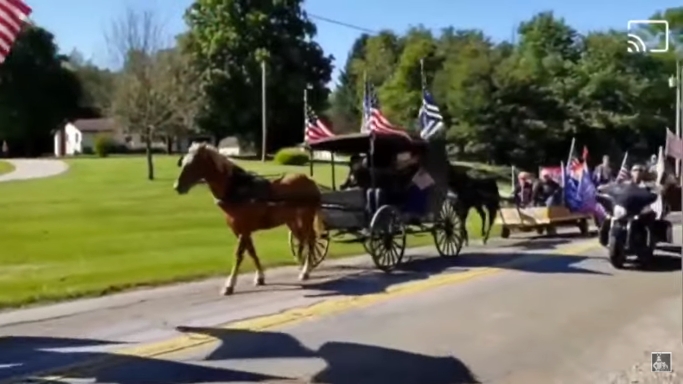 The drivers of the buggies appear to be younger Amish, though I was told that there is at least one married Amishman in one of them (or at least, an Amishman with a beard, which is not always a sign of marriage). And not all those traveling by animal power appear to be Amish in this parade either.

I wouldn’t expect there to be a lot of baptized church members in a parade like this, given the Amish formal separation from politics (though that doesn’t mean that Amish people don’t have political opinions). Though perhaps that formal separation is gradually shifting in some quarters, especially considering the delegation of eight Amish who visited the White House late last year. 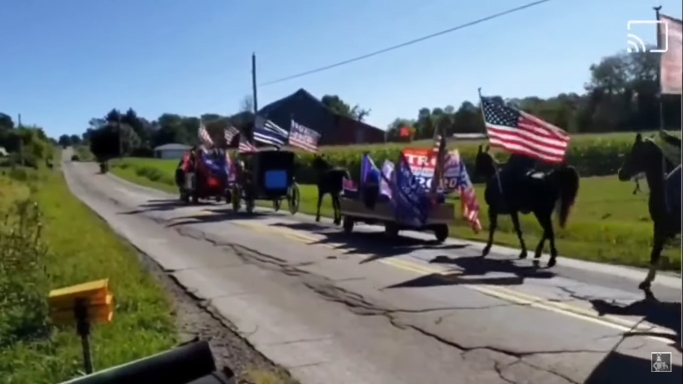 It may be that a younger generation of Amish and those more aligned with business are more open to at least semi-public political displays.

The event was covered at least initially by the Wooster Daily Record, but the original link to that article is not working. It is still available online here in cached form. You can also see a couple of their high resolution photos here and here. 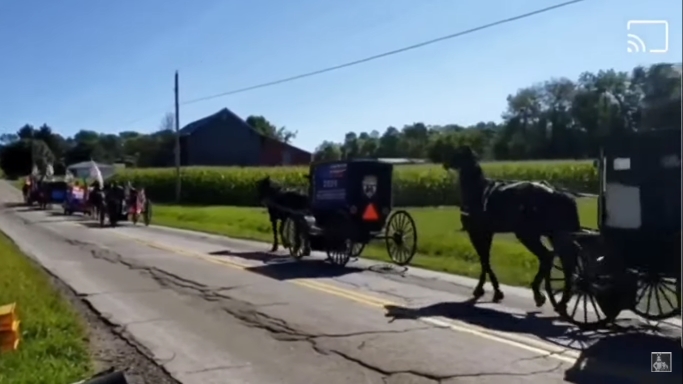 The organizer of this parade is a group called Bikers For Trump. This excerpt is from the Daily Record story, with comments from organizer Chris Cox on the Amish:

In a video, Cox said the purpose of the parade is to show Trump he has the support of the Amish and Mennonite communities and to energize community members in preparation for the upcoming election. On Dec. 20, Cox said, a group of Amish and Mennonite — including residents of Wayne and Holmes counties — visited the Oval Office.

The Amish community supports the president for his stance on abortion and the second amendment, Cox said.

Cox expressed surprise in the video at the turnout and support from the Amish.

The Amish have been targeted the past two election cycles by the Amish PAC, which seeks to promote voting among the Amish. The group has run advertisements in Pennsylvania and Ohio. 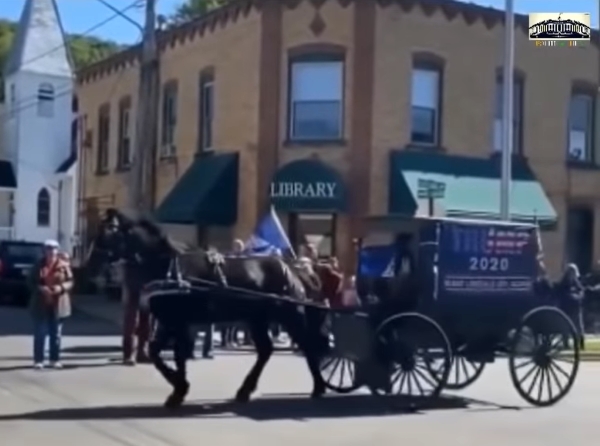 Only a small minority of Amish vote in political elections. The Amish do believe they should pray for their political leaders, however. They might further say that the most important “voting” they do is when they choose new ministry for the church.