The Kentucky Amish SMV situation has seen quite a few developments this week.  On Tuesday the KY House Transportation Committee passed Senate Bill 75 by a count of 25-1, sending it to the House for full consideration.  This bill would allow reflective tape in lieu of the SMV triangle.  If it passes the House, it returns to the Senate for final passage.  The last hurdle would be the governor’s signature. 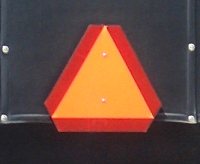 Soon to be resolved?

Yesterday, a separate amendment to the State Constitution passed the Kentucky Senate (Senate Bill 158).  This bill “would require that the government have a compelling reason before it could infringe on anyone’s religious right”.  According to the article the bill has its roots in a 1990 Oregon Supreme Court Case, but would have implications for the Kentucky Swartzentruber Amish.

Also yesterday, the SMV case came up before the Kentucky Supreme Court.  During hearings the effectiveness of the triangle itself came into question:

“Do we have any real evidence that this triangle that the law imposes on the Swartzentruber family branch indeed does what it says what it’s supposed to do?” Justice Mary C. Noble asked Assistant Attorney General Christian Miller.

“There is something that needs to be on the back of those buggies to draw people’s attention,” Miller said.

American Civil Liberties Union attorney Bill Sharp, an attorney for the Amish, said the law does not require bicycle or horseback riders to use the triangles “yet a six-foot-tall carriage that’s roughly the size of a compact car does have to have one.”

Whether by judicial ruling or legislative change, it sounds like chances are good KY’s Swartzentruber Amish will soon drive their triangle-less buggies without threat of fines or jail time.

According to the first article linked above Amish have already implemented requirements of Senate Bill 75.  They’ve outlined both the back and sides of their buggies in reflective tape.  Swartzentruber buggies are also carrying two lanterns, with one sitting a foot higher than the other, according to the stipulations of the bill.

Staggered or even lighting better?

On that last point, I’ve always wondered which in fact is more effective–level, even lighting, or the staggered arrangement in the Kentucky bill.  On the one hand the even lights would imitate those of a car, something drivers are used to seeing on the road.  On the other, the uneven positioning may indicate (to drivers who recognize the arrangement) that what lies ahead is not a car but a much slower-moving buggy.

But it seems like the uneven arrangement would rely on driver familiarity to be effective.  An unfamiliar driver might be confused by what exactly he is seeing.  I also wonder that if this uneven arrangement were superior, then why do other Amish not employ it via the positioning of their main rear lighting, which otherwise mimics that of cars.

Buggy lighting of course varies among the diverse Amish groups.  While plainer groups use minimal lighting, others boost visibility with an array of bulbs and blinkers.  In an illuminating piece, Bruce Stambaugh writes about the work of the Amish Safety Committee in Ohio, a three-man group working to improve Amish road safety for the better part of 2 decades. 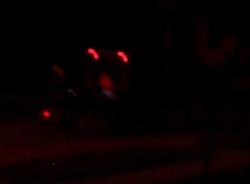 Night riding.  An Amish cyclist follows close behind a buggy

Committee member Wayne Hochstetler cites the blinking amber light as “the biggest help” in promoting visibility.  This light is found at the top center of the buggy, and in some versions produces varied blinking patterns.  Bruce also discusses the growing use of LED headlamps as well as reflective and even blinking safety vests among Amish pedestrians.  Read it all here.

Finally, in a timely reminder that accidents aren’t always the fault of English drivers, an Amishman failing to yield caused an accident in Missouri yesterday, with both car and buggy driver landing in the hospital.