You might think that Amish would ride horseback often.  After all, they certainly have much familiarity and experience with horses.

However among Amish riding horseback is not common.  I’ve seen it a few times, but its usually been youth, mostly girls.  You may occasionally see Amish men riding on horses.  Amish horse trainers would be another possibility.

What brought this question to mind was a photo Mary Brandenburg shared, of Ohio Amish children doing their own version of horseback riding: 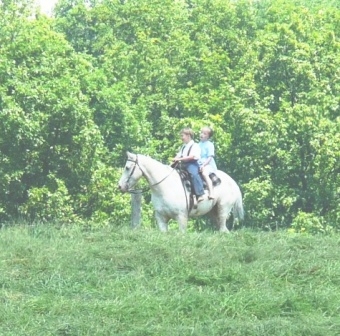 Horseback riding is uncommon among Amish

Plain Buggies author Stephen Scott describes it like this: “One will occasionally see a child riding a pony or a young man out for a ride, but almost never would a person ride a horse to church.  Obviously the problem of modesty is involved for women and, of course, only one or two people can conveniently ride a horse with room for very little baggage” (Plain Buggies, p. 43).

In The Riddle of Amish Culture, Donald Kraybill notes that it is “generally discouraged because it borders on a worldly form of sport” (Riddle, p. 70).

I haven’t dug into the question too deeply, but I also wonder if issues of pride may play into it for some Amish.  After all, the lone horse rider (i.e., the cowboy) is a symbol of individualism in American culture.

For more on how Amish get around, try 5 ways Amish get from point A to point B without a car (or buggy)