About 6 years ago, my husband & “kids” (then ages 23 & 29 at the time, daughter & son, respectively) were coming back from some concert in Millennium Park (or Grant Park?) and a young Mennonite woman (late teens, I’d guess) greeted me (I guess it was obvious I was the “Mom”) and handed me a brochure about Menonnite beliefs & Christianity in general. She was dressed fairly plan, though no prayer cap. I saw a few other plainly dressed young people in the general area—male & female.

I wonder how common it is for this kind of thing—even by Mennonnites—evangelizing in a big city, handing out brochures. Do any of the more liberal Amish groups ever do it, Erik?

One thing that sets Amish apart from many Christian denominations is their reluctance to vocally promote their faith.  Amish feel drawn to a quiet witness. 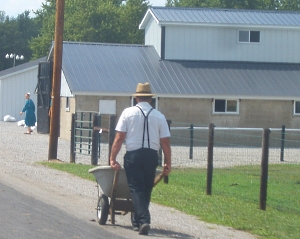 The authors of The Amish Way explain Amish thoughts on winning over souls:  “In publications, sermons, and daily conversations, Amish people emphasize the importance of “letting our light shine,” but as one man said, “not shining it in the eyes of other people” (The Amish Way, p. 42).

The concept of spreading the faith through words strikes the Amish as hollow.  They believe that the best way to judge a person’s faith is to see it lived in context, in community.  Unless they are asked, putting their faith into words for people they have never met before and may never see again makes little sense to them.  There is little point, in their view, to inviting someone to a personal relationship with God without requiring obedience to a church-based lifestyle (The Amish Way p. 43)

One qualified exception are the New Order churches, which do some things we might consider more “vocal”.  Ohio-based Amish Brotherhood publications produces a number of pamphlets and books dealing with faith.

I’ve received these on a couple of occasions from New Order church members.  One better-known tract, first published in 1983, is titled The Truth in Word and Work: A Statement of Faith by Ministers and Brethren of Amish Churches of Holmes Co., Ohio and Related Areas.

More aggressive efforts such as what Alice Mary describes are not something you’d see, however.  As for traveling beyond Amish areas, charity and mission relief work is accepted, and common among not just the New Order Amish.

Old Order Amish as well are active in disaster relief and other efforts such as meat-packing for food donations, organized through CAM (Christian Aid Ministries) and other charities.   A good description of some of these activities among the Holmes County, Ohio Amish can be found in the book An Amish Paradox.

But even away from home, Amish witness in an Amish way.  Writing of Amish disaster cleanup work, the authors of The Amish Way explain:

Amish relief workers did not expect to convert others to the Amish way through such brief contact, even if their work was deeply appreciated.  Their service was an end to itself, not an effort to proselytize.  In fact, some Amish view the notion of seeking converts to one’s own church as prideful.  They hope that their Christian witness will lead others to deepen or renew their own faith rather than become Amish (The Amish Way, pp. 43-44).