Over the past few months, one of our readers in the Midwest has gotten to know an Amish family dealing with a trying circumstance.  He shares an interesting observation/question:

Other than the youth sing-a-longs that took place for [a recovering family member] where they sang some Christian songs, it is almost non-existent that this family brings God into the conversations.

While I am happy that they are not out to preach to me like some religions do, it is so far the other way that I wonder how important God is really to them.

An outsider might think that because the Amish dress as they do that this is a sign of their deep love of God. I wonder how many Amish just go along to get along because that’s all they know.  Even on one to one talks with them I don’t hear that their main goal is God driven.  So I am left to wonder what this all means.

Others have made similar observations.  My first thought is that I can understand the sense of contrast, especially considering how freely religion is discussed in American public life.

Examples of that abound–pro athletes who reference the Lord’s aid in post-game interviews, politicians whose “God-talk” ratchets up a notch in certain precincts, or even religious bumper stickers which do the talking for drivers. 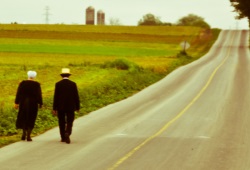 “Shining a light”, but not blinding the other person, is something you often hear in Amish circles.

“The concept of spreading the faith primarily through words strikes the Amish as hollow,” write the authors of The Amish Way: Patient Faith in a Perilous World. “They believe that the best way to judge a person’s faith is to see it lived in context, in community” (The Amish Way, p. 43).

I’d add that some Amish are more forward about speaking about religious matters than others.  As a rule, New Order Amish tend to be more vocal in this area.  Those I know seem to make a point of regularly bringing up issues of faith.

Other of my Amish friends are more “delicate” (for lack of a better word) about how they bring up religious topics, but over time they do come up.  However, this may be a factor of how well I know those families.

What do you think?  What have you observed?