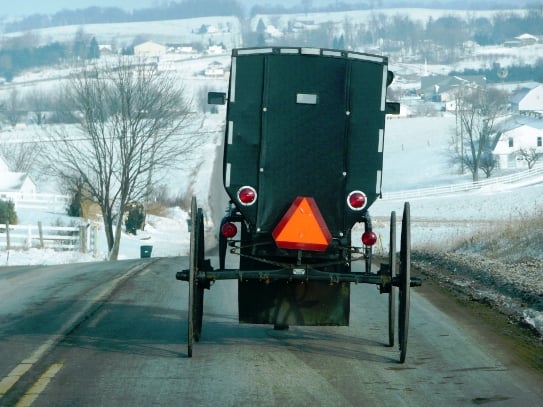 An Amish buggy travels down County Road 77 in Holmes County

Thanks to Mary for sharing the above photo of County Road 77 in Holmes County, Ohio.  You might recall CR-77 mentioned in the comments section of the Amish buggy safety post of a couple weeks ago.  Hurst and McConnell remind us that CR-77 is known locally as the “Amish roller coaster”, for its series of rolling hills.  You can kind of get a sense of that here from this photo.

CR-77 runs from Highway 39 near Berlin through Bunker Hill and on up to Mount Hope.  Heading north along CR-77, you pass a number of interesting landmarks.  The large building of the Amish and Mennonite Heritage Center, home to the Behalt cyclorama, lies on the right.  Heini’s Cheese Chalet, with its distinctive Swiss-inspired design, is hard to miss near the Bunker Hill crossroads.  Kauffman’s Bakery lies across the street.  I recommend their pies.

Heading onwards, you come to the Amish-owned Time and Optics business, selling clocks and a wide variety of other items including binoculars and scopes.  Quite a few Amish businesses are found along CR-77, for that matter, including a buggy shop and a shoe store.

While they’re not too visible from the road, a few Amish cemeteries lie on farms adjacent to CR-77.  Memory Park features a baseball diamond where Amish youth play in the summer.  CR-77 finally ends at the little post office in Mount Hope.  The village is well-known for the Mount Hope Auction (hosting the Haiti auction and many other events), Mrs. Yoder’s kitchen (popular among Amish and non-Amish alike), and garage door manufacturer Wayne-Dalton (where many Amish work). 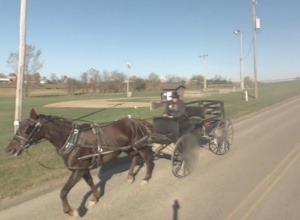 CR-77 is used heavily by Amish.  You typically pass many bicycles, buggies, and other horse-drawn vehicles along its five miles.

But as mentioned before, CR-77 is not the safest road in the county, because of its relatively high speed limit and low visibility due to the hills.  Speed limits have recently been dropped on the road, though.