The much-discussed “Amish Mafia” premieres tomorrow, but the “sneak peek” is on tonight.  Some reporters have been asking Amish experts what they think of the idea of an Amish mafia. Donald Kraybill calls it fiction, and David Weaver-Zercher says he first thought it was a parody sketch of reality TV.

I have been hearing basically the same thing elsewhere–no one seems to know what the Amish mafia is, that Amish are “mystified” by this idea.  Of course, if no one will admit to the Amish mafia, that doesn’t prove anything, now does it?  We must be asking the wrong Amish people, I suppose.  Sounds like conspiracy theory thinking may help this show along.

Yesterday I watched the preview clips and read more about “Amish Mafia”.  I learned that this group of 4 Plain vigilantes comprise “a secretive subculture that operates within its own rules and values”.  At the beginning of each clip a shadowy bearded figure informs us, in Pennsylvania Dutch, that some of the scenes are reenactments “to ensure the safety of innocent Amish”.  Apparently it can be difficult to tell which scenes are real and which aren’t, according to one writer who has viewed the first episode.

In the clip below, we learn that group leader Lebanon Levi is “the cops, he is the courthouse, he is the bank, and he is the insurance company”.  Levi sounds like a busy fellow.  It must be hard work running Amish society behind the scenes.

You may have heard that some Amish businesses show up on the internet thanks to non-Amish help.  I recently came across one Amish contractor‘s online presence.  The first few lines of this ultra-plain one-page website:

Please have Ray contact us – we have no phones.

Real Amish workers will come to your jobsite and work very hard for you at a reasonable rate.

We are very good wood craftsman.

We can build you a post frame barn, any size.

They emphasize that “real Amish” will do the work twice on the page.  I imagine the person helping them probably created the text and content here, which uses promotional language I’d think would be uncomfortable for most Amish.  This business is based south of Columbus, Ohio, in an area with numerous small Amish communities nearby.  View the site here.

Congratulations to Dave Goodman, winner of the “Seasons” matted photo series. Thanks to everyone who joined in our 3 Bill Coleman photo giveaways. If you think someone in your family would enjoy one of these photos, you can still order most items in time for the holidays.

You can also find some nice gifts for under $30, including posters and a photo book.

You may have noticed the new “Amish Topics” link on the top menu.  A few weeks ago Ed asked about a message board format to keep posts visible longer.  I like the idea, if I can find a relatively low-pain way to do it.  In the meantime I’ve gathered over 100 of the more active posts on this Amish Topics page, organized by categories (“Tough Questions“, “Amish Women“, “The Lighter Side“).  We should have an improved search box up soon as well to make older posts easier to find.

A man brought in some license plate art, wanting him to sell it.  John didn’t think it would sell, but was persuaded to try two or three.  They have been selling, so the man makes more.  They are made by non-Amish and sold in an Amish-owned store.
The license plates have a backing, and are cut in various shapes.  Several license plates are used for one art piece.  One artwork was sold because it matched the buyer.  They were in Michigan and a Michigan plate was used.  They had a daughter from Arizona, and a Arizona license was also used.  It also said handicapped and the husband was handicapped.  All three were on one art piece, shaped like the state of Michigan.  This unconventional artwork gives new meaning to the phrase “artistic license.” 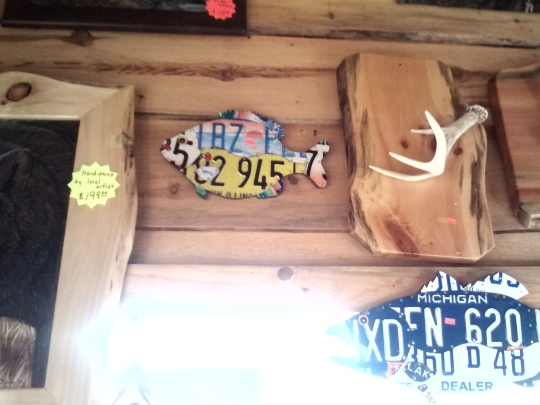