You might read this post title and assume that an unfortunate Amish buggy driver was the victim in this accident. And I wouldn’t blame you. That’s usually the case.

But in this instance the tables were turned, when a non-Amish woman was hit by a buggy seemingly “out of nowhere.” 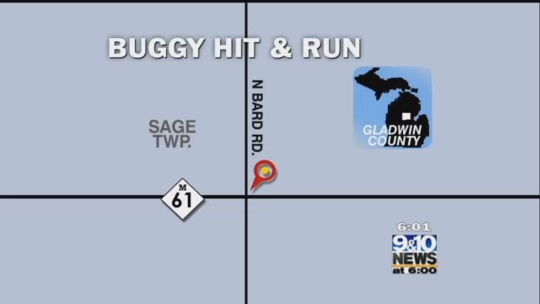 Victoria Ulrick was driving in Gladwin County, Michigan, home to two Amish settlements, when a passing buggy veered into her lane, “running right into and on top of her car.”

“The hoof, if it would have been an inch lower, I think it would have came through the window and probably squashed my head and left my son alone in the back,” Ulrick says. “I had some stuff in the backseat. It flew over onto him from the impact and it was very loud and very scary.”

As quickly as it happened, the buggy and whoever was driving it was gone.

“I started bawling instantly,” Ulrick says. “It was terrifying.”

Ulrick is 22 weeks pregnant. You can see the damage to the car and hear her describe the incident in this 9and10news.com video. Her description of the horse coming over the car is truly frightening to imagine:

While the Amish are usually on the short end of the stick when it comes to road incidents, sometimes Amish horses and buggies are themselves the cause of accidents .

This incident occurred on New Year’s Day. According to a follow-up report, investigators have been in touch with the man driving the buggy, who says that once he got his horse under control, Ulrick was nowhere to be fond.

“God was definitely with us and protected us from what could have happened,” said Ulrick.