Over the past weekend a driver apparently purposely drove his car into a horse pulling a buggy full of Nappanee, Indiana -area Amish teenagers.

Francisco Gonzalez was captured on a Wal-Mart parking lot camera turning around and returning to the road to run into the buggy horse, which was killed instantly.  The boys were shaken but unhurt; what the driver left behind was described as a “gruesome scene” by a reporter.

Gonzalez, by the way, registered a 0.17 blood-alcohol level. 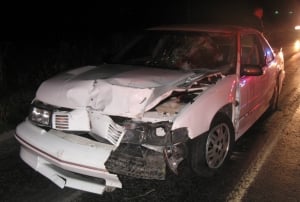 Gonzalez’s car showing the impact of the accident

There were conflicting stories with the teens first reporting that the collision was not intentional.  Now the teens are saying that the driver accelerated and swerved into the horse. (NOTE: Reporter Stacey Page has noted below that though the initial police press release stated that the teens described the incident as unintentional, the teens themselves have maintained from the beginning that the driver did in fact hit the horse intentionally.  This discrepancy remains unexplained).

As stomach-turning as incidents like this can be, violence against Amish is not all that uncommon.   For example the book The Amish Way describes robberies which occurred in the Nappanee area in the mid-1990s.  Up to fifteen Amish bicycle riders were attacked and robbed, and some seriously injured.  Amish were seen as easy marks who wouldn’t report crimes (until one Amishman, fearing that someone would be killed, eventually did).

To me this incident is somehow more disturbing than the accounts of those more methodical robberies, even though no one besides the horse was hurt here.  I think that’s due to the seeming spontaneity and maliciousness of the act–and also the unanswered questions.

Did Gonzalez know the victims?  Did they provoke him somehow?  Or was this just a random act of violence by a person who shouldn’t have been on the road to begin with?    I expect more details will emerge.