Outside of a childhood trip to Lancaster County and a brief day in a southern Michigan Amish community, Arthur,  Illinois was the place where I first came to know Amish, while selling books there in 2004.

Arthur is in fact the sixth largest Amish settlement, with a population of about 4,000. 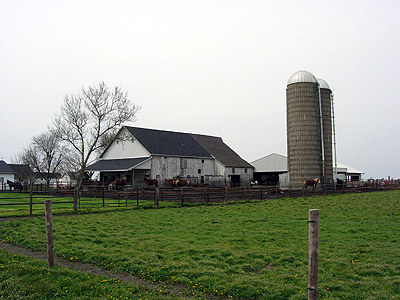 Arthur is a community about 3 hours south of Chicago in the flat farmland of central Illinois.  The Amish community spreads outward from the small village of Arthur about a half-dozen miles in each direction.  It stretches from the edge of Sullivan, the seat of Moultrie county to the southwest, to Arcola, located off the busy I-57 corridor corridor to the east, and up to highway 36 to the north.

The grid-like, mile-blocks of country road around Arthur are easy to navigate.  Most if not all roads are blacktop, unlike those in the dusty Daviess County Amish settlement, and therefore navigable during the rain (which can’t be said about a few of the mud-susceptible byways in Daviess County, as I found out the hard way).

There are a large number of woodworking shops in the Arthur area (read more: Amish Furniture-Illinois).  Other Amish work for the large garage door plant in town, while dairy farming continues as a favored occupation as well.  A recent article stated that Amish run over 225 small businesses in the area.  A tourist industry exists in Arthur, but not to the same degree as in larger Amish settlements further east.

Interestingly, for a period before the founding of the Arthur community in 1865, there was another sizeable Illinois Amish settlement located in Woodford and Tazewell counties near Peoria.  With its five congregations, it was larger at the time than Lancaster County.  However,due to progressive change, there is no longer an ‘Amish’ presence there today.

(Tazewell/Woodford info from David Luthy, The Amish in America:  Settlements that Failed 1840-1960)

For more on Amish in the Land of Lincoln, try the Illinois Amish state guide.