A new study seems to show that Amish children are “remarkably immune” to both allergies and asthma.  Researchers compared a group of Indiana Amish children to Swiss children from both farm and non-farm environments.

The Amish asthma rates were also less than half those of the non-farm Swiss kids, and significantly less than the Swiss farm cohort’s.

There’s a good bit of speculation as to why this may be the case: from genetic causes to raw milk to greater exposure to allergens and dirt on the farm. From the article:

“The rates are very, very low,” said Dr. Mark Holbreich, the study’s lead author. “So there’s something that we feel is even more protective in the Amish” than in European farming communities.

What it is about growing up on farms — and Amish farms in particular — that seems to prevent allergies remains unclear.

Researchers have long observed the so-called “farm effect” — the low allergy and asthma rates found among kids raised on farms — in central Europe, but less is known about the influence of growing up on North American farms.

Holbreich, an allergist in Indianapolis, has been treating Amish communities in Indiana for two decades, but he noticed that very few Amish actually had any allergies.

Fascinating story, especially since it seems like you hear more and more about allergies these days.  I’ve never really had any allergy issues, though I know some people suffer greatly, especially this time of year with pollen and other allergens flying about the atmosphere. 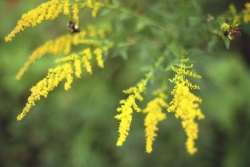 While I’m sure some seasonal allergy sufferers have it pretty bad, year-round food allergies seem like they’d be worse in a way. I’d hate to have an allergy for something I love to eat: peanuts and shellfish, for instance (though usually not together).  That would knock a little joy off life’s tally right there.

I also didn’t realize you could develop allergies later in life until just recently.  My grandmother brought this to light with a skin reaction she’s been enduring.  I’ve heard people blame the high-powered soaps and hypoallergenic products we use as part of the problem.  I have no idea on the science but perhaps there’s something to that.

What do you think–are allergies getting worse in general?  Anyone develop an allergy post-childhood?  And how do you allergy sufferers out there cope?