Human vaccination has been a hot issue for many years.  We don’t really think as much about animal vaccinations.  However animal-borne diseases are a potential danger, and not just to a farmer’s bottom line.

Officials in New York are trying to get horse-owners, and in particular Amish in the state to immunize their beasts against an equine brain virus. 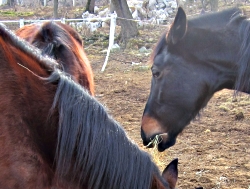 This is apparently a public safety danger as the virus can move from horses to humans via mosquito.  There is no vaccine for humans available.  In fact a young girl in upstate New York died last year of the disease.

Since money is an issue, it looks like a state grant is going to help cover the cost.  But will all Amish comply?

Karen Johnson-Weiner, who probably knows the New York Amish better than anyone, said she wasn’t able to speak for all Empire State Amish even though she thought many would.  “The Amish are first to say, ‘We’re all human. We’re like you,’…Some do things, some don’t do things.”

Yesterday it turns out the first vaccination clinic was held at the “Herschberger farm” in the Heuvelton, NY Amish settlement.

It’s a little unnerving to read that “no vaccine is available” for this or that scary disease.  We’re getting to the point where it seems there is a pill or shot for just about everything, and what were once death-sentence illnesses are now curable or manageable or preventable.  However science doesn’t have a solution for everything, and probably never will, even though what has been achieved is nothing short of amazing.

I’d imagine a horse vaccine is available and a human one isn’t because, after all, the virus primarily strikes that animal.  In any case this is another little reminder that life is, and always will be, only partially safety-proofed.