“The guy with the beard” 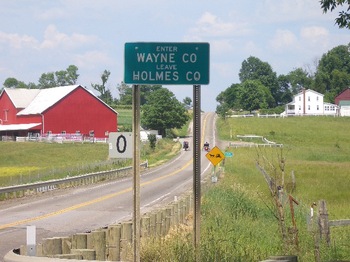 Day Two in Holmes County was a great one.  I had a chance to catch up with a lot of Amish friends and acquaintances.

I sat for an hour and a half having a nice chat with one friend, ‘Johnnie’, who just had his fifth child (all girls!).  He gave me a bottle of homemade blackberry wine to take away.  He, like many Amish, appreciates the health benefits of homemade concoctions, having the occasional sip of wine at bedtime.

Johnnie admitted he wasn’t a pro at making it, and sometimes had to throw out a batch.  He figures a lot of the taste variation can come from the quality of that season’s fruit.  Johnnie also makes elderberry, strawberry, and red clover varieties.

Today they’ve got a wedding to go to.  Weddings are another occasion where you may see the odd bit of homemade wine.

Johnnie also recently planted a ginseng crop.  Most Amish are big on natural treatments.  I have another friend who sells natural supplements and vitamin concoctions.  I’ll need to pick up some more from him today.  He swears by it for his joints and overall health.  I have to admit, the last time I was on the stuff I felt pretty good. 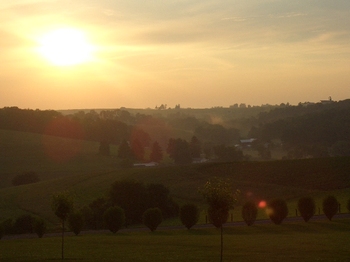 I also had a chance to drop in on a bishop and his wife whom I’d met a couple years ago.  ‘Vernita’ was hard at work in the basement with a batch of strawberries, and ‘Dave’ had just gotten off work. Those two are quite the jokesters.

First they got a kick out of needling me a bit for my Polish ancestry.  But I had a chance to repay the favor.  Pointing at a rocking horse, Dave mentioned they had a new addition to the family, the first child of their son ‘Adam’.

‘Oh, I thought the horse was for you.‘

Vernita chuckled and said that Dave would need to get started on his ‘honeydew’ list.

‘Yeah, honey-do this, honey-do that’, Dave explained, as a smiling Vernita nodded vigorously.

‘Doesn’t that go both ways?  Don’t you have a honeydew list for her?’

‘I’ll let her answer that one’, Dave replied (wink-wink) cautiously.

After a nice visit I went to catch up with Adam down at the auction house in Walnut Creek.  True to form, a grinning Dave pointed out that if I didn’t recognize him after two years, I could just look for ‘the guy with the beard’.

‘The guy with the beard’ in the world’s biggest Amish settlement.