SI Live has published photos of Amish visitors to Staten Island, NYC in a nice slice-of-life look at Amish tourism.

But as these images show, tourism goes the other way too.

It seems that reporter Jan Somma-Hammel was at a Staten Island beach when a vanload of Amish happened to pull up. They were there to catch the sunrise on the boardwalk and dunes, part of a tour of the city.

The group is from Chautauqua County, the Clymer area. It’s one of the state’s oldest and largest communities, founded in the mid-1970s and now at 10 church districts in size.

I liked a few things in this story.

First, it’s always attention-getting when Amish pop up in an urban landscape. Plain people walking against the backdrop of skyscrapers or a major NYC bridge is eye-catching for the obvious reasons.

I also like how this brings out the fact that Amish enjoy seeing sights too, even the “big city,” which would be about the last place they’d actually choose to live.

As it goes with one of my Amish friends, he enjoys NYC…but just for a visit.

But the most interesting thing in this story to me is the driver, a man named William Lucas, who we’re told has been with this group for 40 years.

Lucas must have gotten acquainted with people in Chautauqua County very early on in the development of their settlement, when it was just several years old. How nice to have a relationship like that spanning four decades.

Lucas is described as “friend, photographer, and driver” with the group. Naturally the middle description – photographer – caught my attention.

I wonder if this was self-described, or if that was how the author saw him.

Maybe he does regularly take offhand photos for his Amish passengers. The photo below is credited to Lucas in the article. A nice shot. 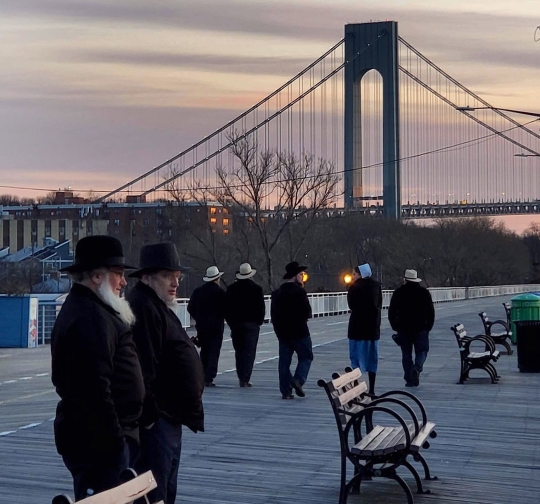 The Clymer community has its origins in the Geauga County, Ohio settlement. They are relatively more progressive compared to other significant communities in the Empire State.

So perhaps having an English friend along who also takes unstaged pictures is something these people are okay with, or even appreciate.

Hat tip to Ed for bringing this story back to my attention.