Among the dozens of victims of last weekend’s spate of tornadoes were four members of an Amish family in Graves County, Kentucky. The Washington Post reports on the aftermath (article behind paywall):

MAYFIELD, Ky. — Through the rain and darkness on Friday night, Chris Crawford heard a baby crying.

The tobacco farmer had ventured into the howling wind a half-hour earlier to warn his neighbors before the tornado hit.

Jacob and Emma Gingerich, both 31, lived across the road with their five children. Their house was a stripped-down double-wide trailer — no electricity, no running water, no indoor bathroom, in accordance with their Amish belief that one should live life as simply as possible.

Now the storm seemed to have passed, and Crawford put on a head lamp and jumped into his ATV to check on them. He saw pieces of his barn’s aluminum roof scattered like torn tissue paper in the trees. When he reached his neighbor’s home, it had disappeared.

Ammon, 8, the eldest of the five children, was barefoot, shaking and crying. Sarah, 3, was alive under some debris. Crawford still heard a baby’s wail. More than 50 yards away, down a slope packed with wreckage, he found Ben, just an infant, lying on the ground in only a diaper.

There was no sign of Jacob, Emma and their two other children. Searchers found their bodies hours later.

The loss of four members of a single family has shattered the local Amish community, part of a conservative sect that believes in remaining separate from the modern world. By Monday, relatives had gathered from five states to grieve in this rural area south of Mayfield. 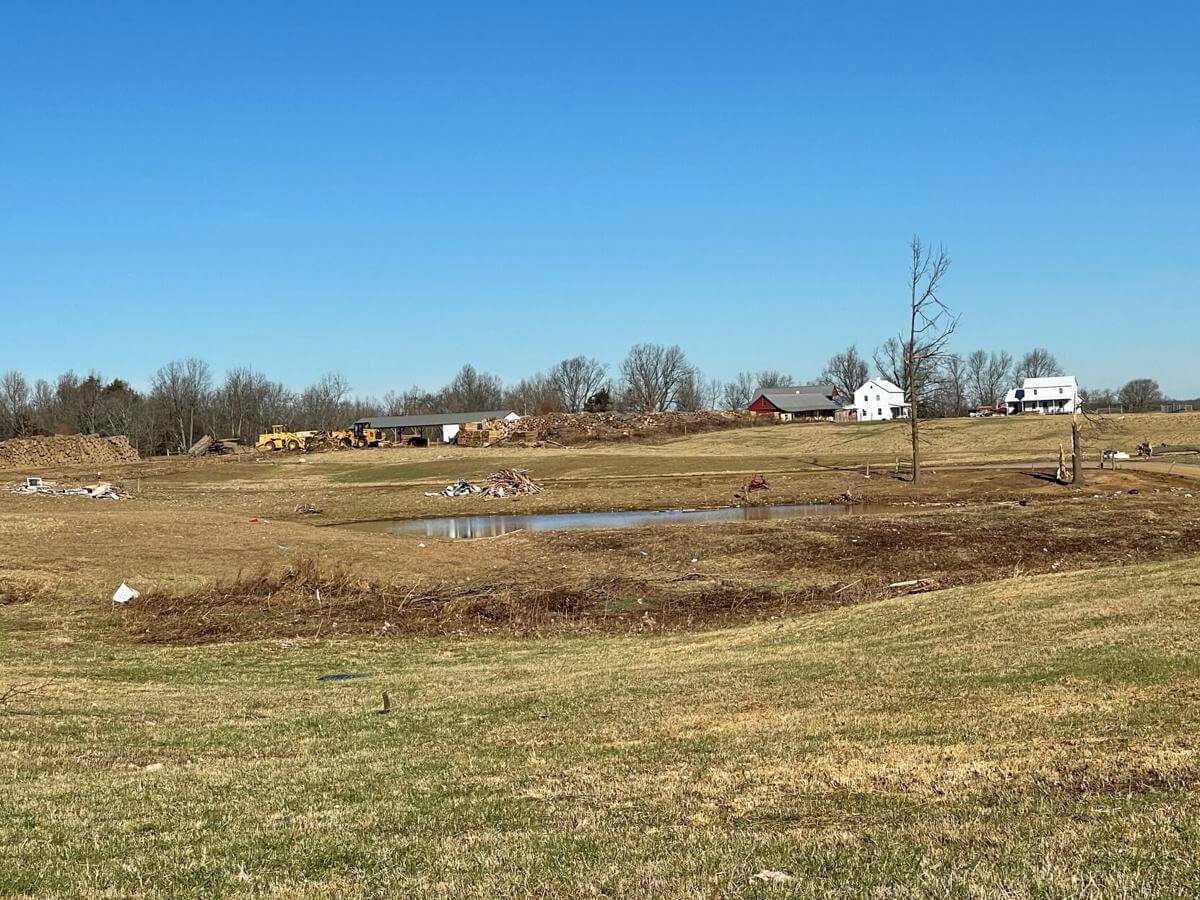 There is a description of the viewing and some comments from the visitors:

Jacob’s paternal uncle — whose name is also Jacob Gingerich and who is 57 years old — came from central Kentucky to mourn.

“It’s hard, but you know — it was meant to be, or it couldn’t have been,” he said, adding that he believes his nephew, his wife and two of their children had left a sinful world and were in a better place.

He feels the worst, he said, for the three little ones who remain.

Abe Gingerich, Jacob’s father, said the surviving children were “bruised up some” but physically all right. He declined to answer further questions. Others said the youngsters will be taken in by relatives.

And also descriptions of the scene, with a photo of canned corn lying amongst debris:

Relatives who had traveled from as far away as Wisconsin — by bus, since members of the community avoid being in cars — walked up a winding road under clear blue skies Monday afternoon to the spot where the family’s home once stood.

Chickens picked their way through the wreckage, stopping to peck at broken glass jars of corn, beets and peaches stored for winter.

The rest of it is pretty heartbreaking with descriptions of the children’s items and other debris. An English friend named Ronnie Dale Murphy had this to say: “They were such good medicine,”…“I loved that family.”

The Graves County community is a Swartzentruber Amish settlement. They made national news a decade ago over non-display of the SMV triangle, with eight Amishmen being arrested and jailed.

A separate, much shorter report by WPSD, shares comments from a bishop in the community and gives an address where donations may be sent:

Three of the family’s other children survived. Funeral services are Tuesday.