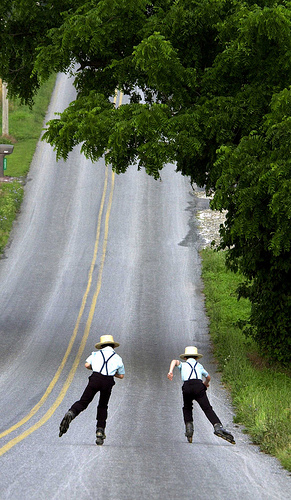 It’s nearly 15 years old, but this New York Times article (http://www.cora.org/amish-skate-art.html) remains an interesting look at a “modern” form of transportation used by Amish (and which some may find surprising).

In-line skates, aka “rollerblades”, are popular in the Lancaster County settlement.  Amish historian Sam Stoltzfus estimates that (at the time of writing) they may be “tacitly” accepted in one third of settlements.  In the article, you’ll find a few Amish opinions on the appeal of rollerblades as well.

The article also sheds light on the process of testing and gradual change that occurs in Amish communities.  One informant puts it well:

“The Amish always try to see if something new fits in with their way of life, and sometimes there’s shady areas,” said George R. Smith, national editor of The Budget, an Amish and Mennonite newspaper in Sugarcreek, Ohio. “But when they do change, it’s usually very well thought out. The Amish don’t go in for any fads.”

As far as other forms of wheeled transportation go, driving and owning cars is forbidden among Amish, while bicycles are accepted in many settlements, especially in the Midwest.  In the Lancaster County Amish community, however, scooters are used, with bicycles unseen in most church districts (there are some where children, at least, do have bicycles).