A non-Amish farmer in Morrow County, Ohio lost his barn in a fire in July. Soon after, a local Amish friend offered help (via Morrow County Sentinel):

One of the first to come after the fire was their Amish friend, David Raber. The Robinsons have sold hay to the Amish and transported them many times for their logging and other needs. They have known Amish in the Chesterville and Johnsville area for many years.

Terry said that Raber offered that he could get them the lumber and materials for a new barn. The materials weren’t a problem since Raber owns and operates a sawmill.

Raber said that he could also get together 40 to 50 men from his community to do a barn-raising for the Robinsons. As plans progressed one of the Amish who makes tents and tarps offered a big tent for the lunch and benches from their congregation could be used.

Robinsons accepted Raber’s offer of help with the understanding they would pay for the lumber, materials and labor as well as a sizeable donation to the Amish community.

The donation they give to the Amish community will go towards their medical and other emergency needs since the Amish don’t carry insurance or accept Medicaid or Medicare.

This is the sizable Fredericktown community by the way, home to about 2,000 Amish (here’s a photo post on that community). Some details on how the barn-raising happened:

Work started a couple days in advance of the main event with the posts being set.

The day before the barn-raising 14 young men came to raise the rafters and some of the frame.

Robinson said there were some young boys who came that were just 10 or 12 years old. They ran to get the nails and other things needed as they learned to work beside the men.

Saturday morning Raber brought together 40 men to complete the barn. 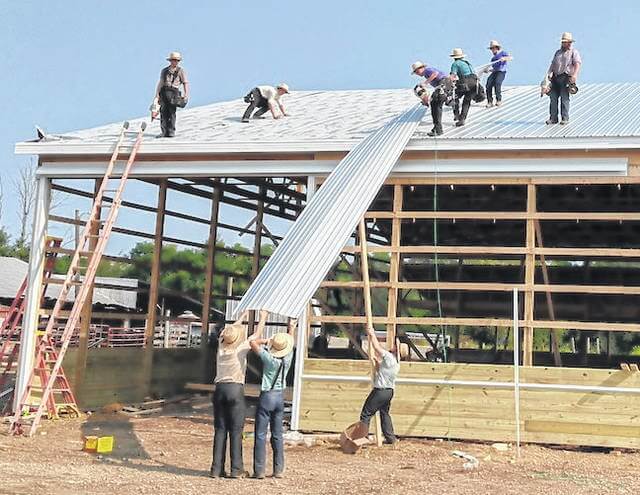 While this wasn’t a “donated” job, I’d imagine he ended up paying a lot less than the would have elsewhere, and I’m sure wanted to do well by his Amish friends and neighbors as well. “We have good neighbors” said Robinson.