So this is one of the rougher-looking Amish places we’ve seen – maybe the roughest. You can see the exterior has an unfinished scruffy look to it. 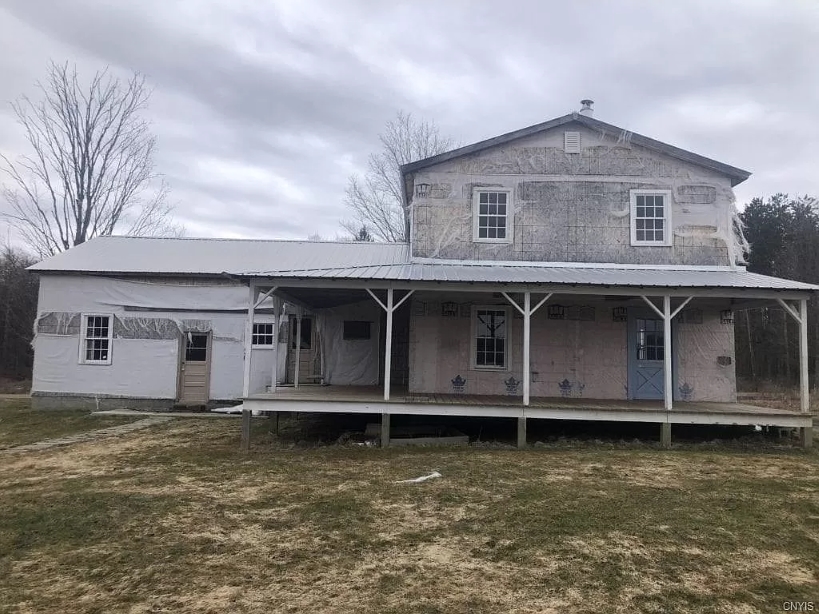 Inside, the place has been cleaned out, and also appears unfinished in parts. 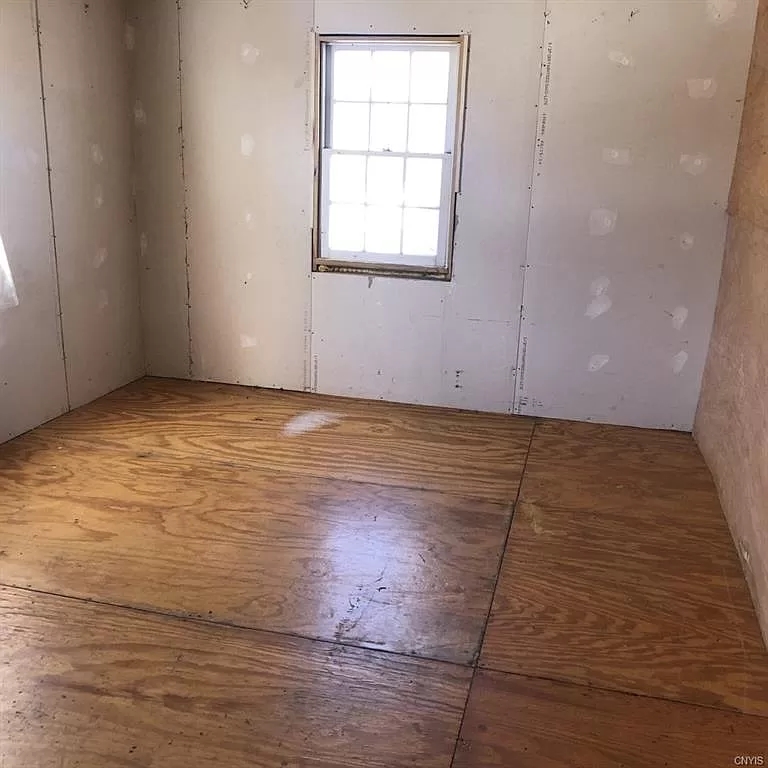 But it is a certified organic farm (or at least was until recently – it’s been on the market for the better part of a year). 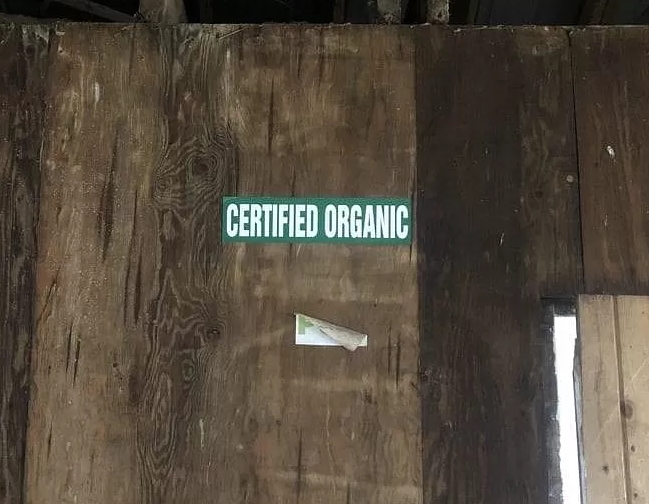 This is from the group of Amish properties for sale in Angelica, New York (Allegany County). We’ve looked at two of these already. It’s another instance of multiple Amish places going on the market in one community (see also the seven Kentucky Amish homes for sale). 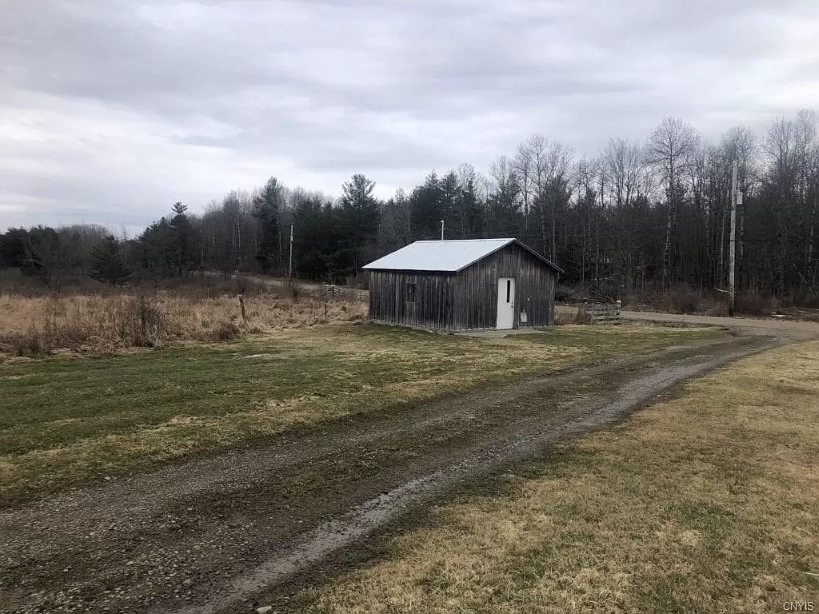 One of our readers, Lorna, offered some more info on the community:

I know this community–but not why it’s emptying out as quickly as it sprang up! My friends who left it will not say.

The area is very rural, but not really so far from necessary resources, as long as you like the folks you live with and don’t miss a lot of company. They get a lot of snow and the roads are dirt, but still maintained and passable all year.

This community was a very conservative one of “Troyer Amish.” Each house was built to be or, converted to be, completely sufficient although off the grid. 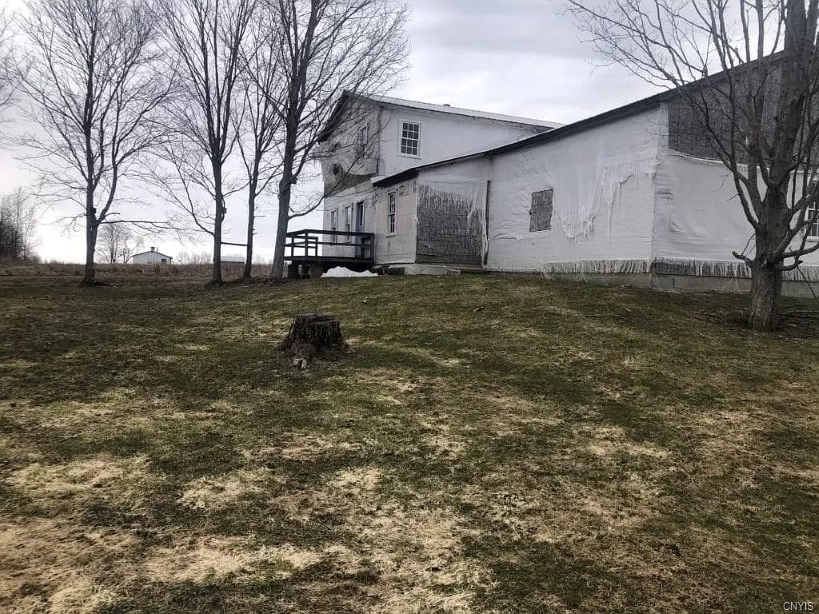 She goes on to describe the setup in these homes in much detail. An excerpt:

That sink is plumbed into some water supply so that there is running cold water to the house. There would have been a large, wood-fired hot water tank outside or in the washroom for hot water for baths and washing. This big stainless steel appliance also doubles as a very large water-bath canner and holds at least 60 quart jars at a time!

The wood cookstove in the kitchen would have had a hot water reservoir on it so that there is continual hot water available except in the summer, when they move that big heater out on to a porch so it doesn’t heat up the house.

You can’t see any of that here, because this home is even more empty than the second one of this group which Lorna was describing (the first remained fully furnished when the photos were taken, however). 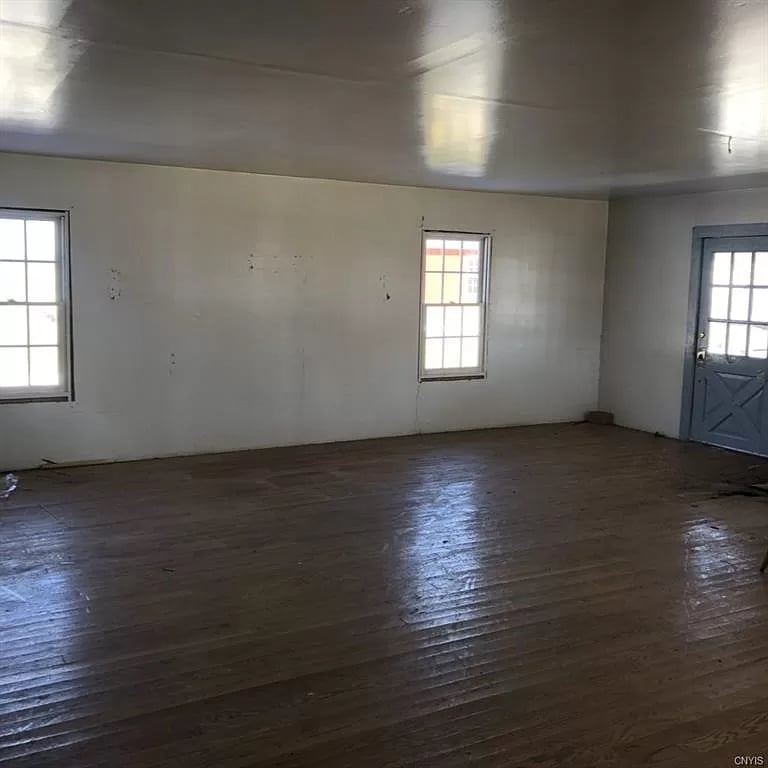 So you’ll have to use your imagination on what was in here. It’s listed as having four bedrooms – and no bathrooms. 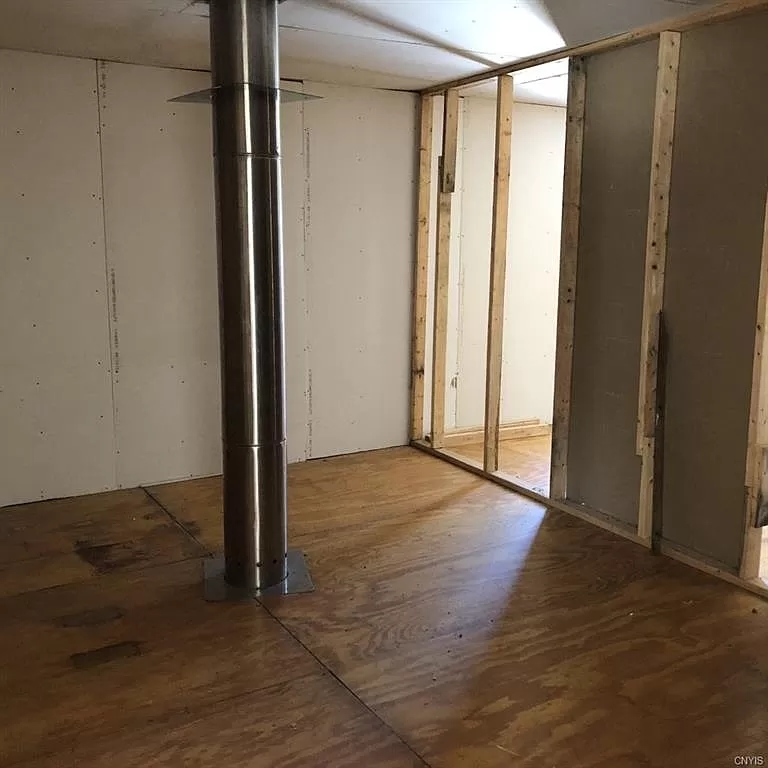 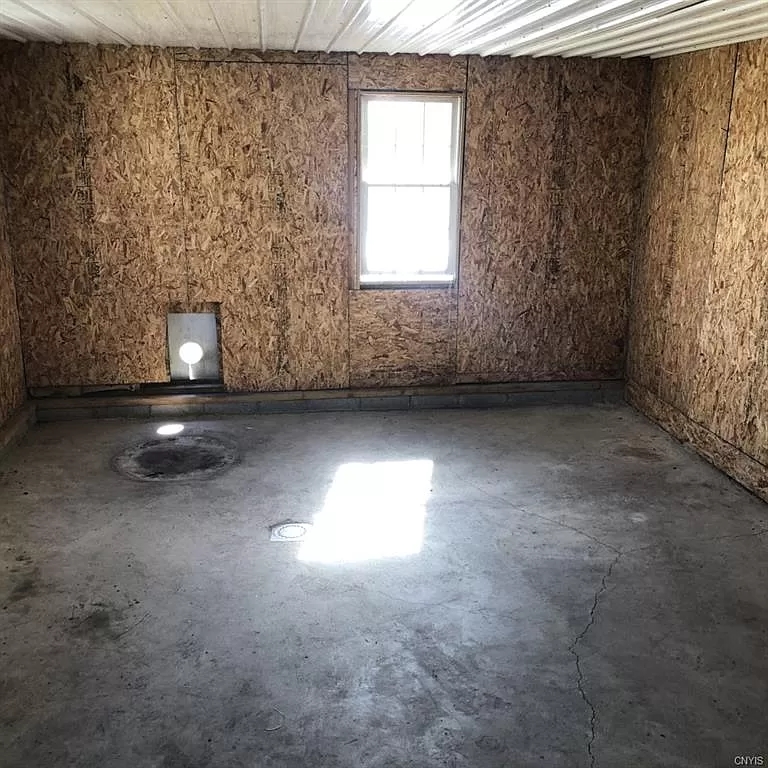 So much potential!! Farm was previously an Organic Amish farm. The Amish milked approximately 25 cows. Large barn was built just a few years ago and includes a second story hay mow, 8 horse stalls, 2 large box stalls and a grain room. Barn is ready for cattle or horses. Detached milk house as well which has electricity.

The Amish built home has spacious first floor rooms with hardwood flooring, mudroom, and several bedrooms with other possible rooms on the second floor. Includes an Amish built shop with concrete floor and other storage buildings. There is electric at the road.

100 acres consist primarily of tillable acres. Excellent property for rotational grazing. Some fencing established throughout the property. Also, there is a nice section of woods with tree blinds throughout for great hunting.

Going outside, we can get a look at some of those 100 acres. 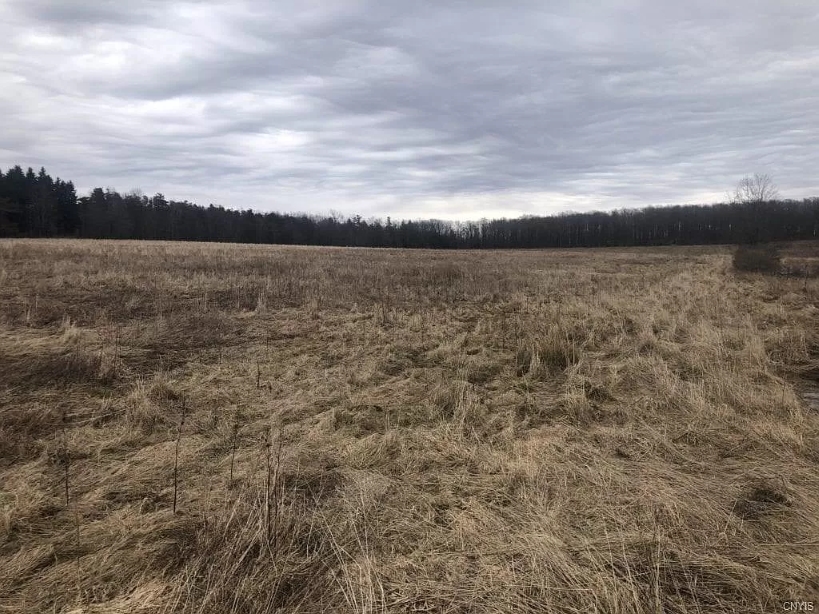 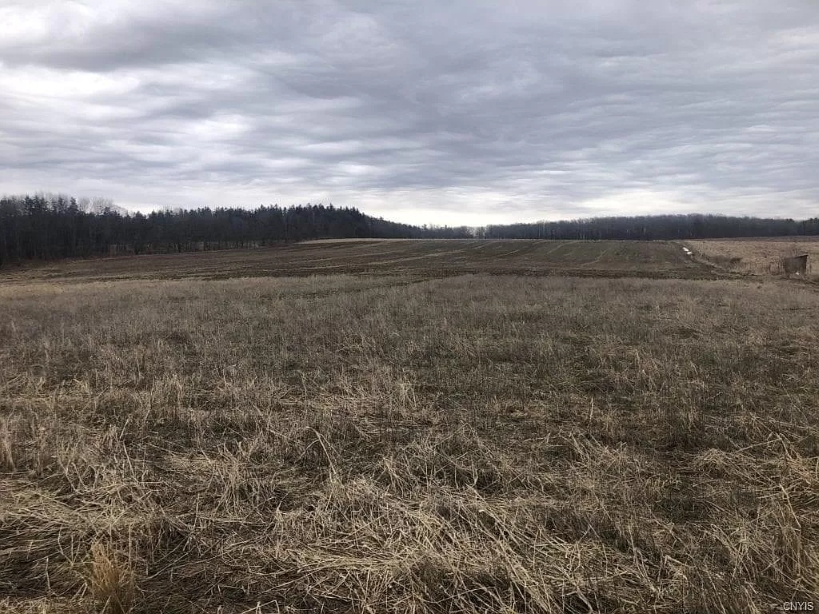 The barn and outbuildings. 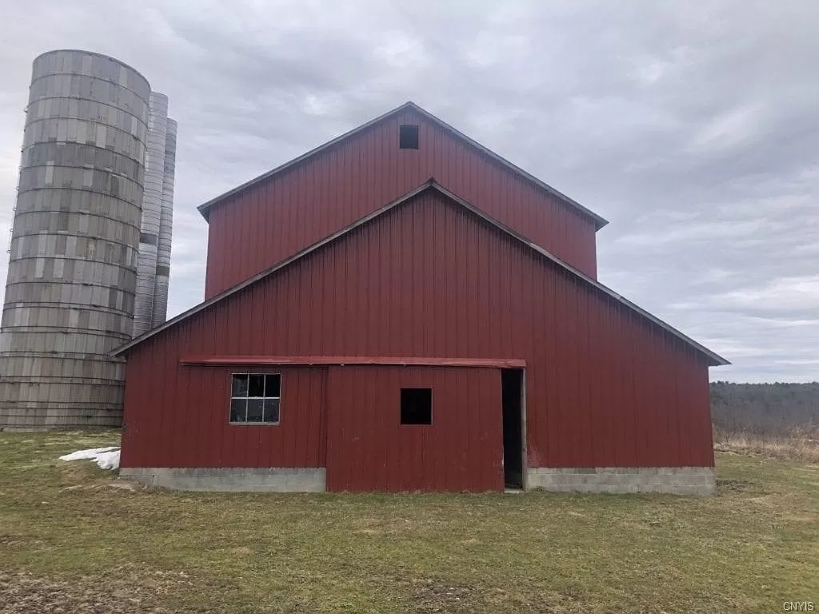 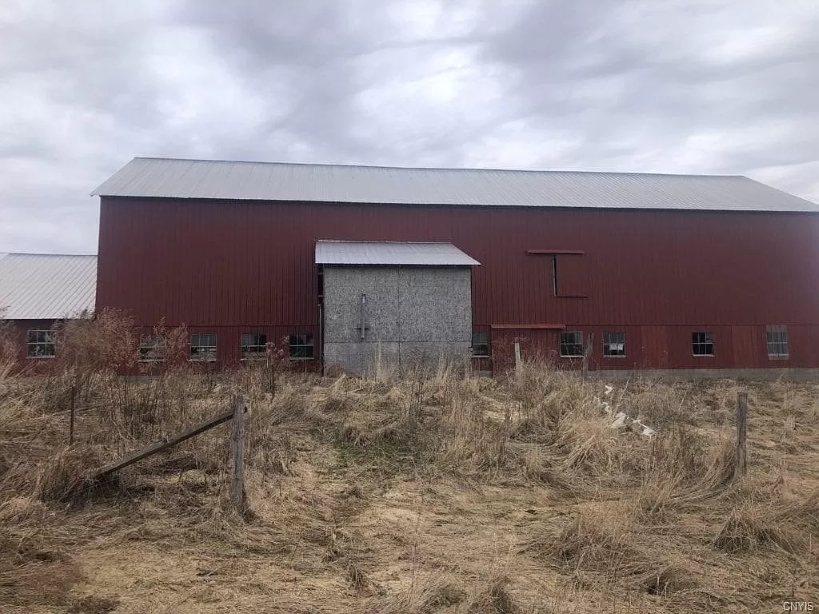 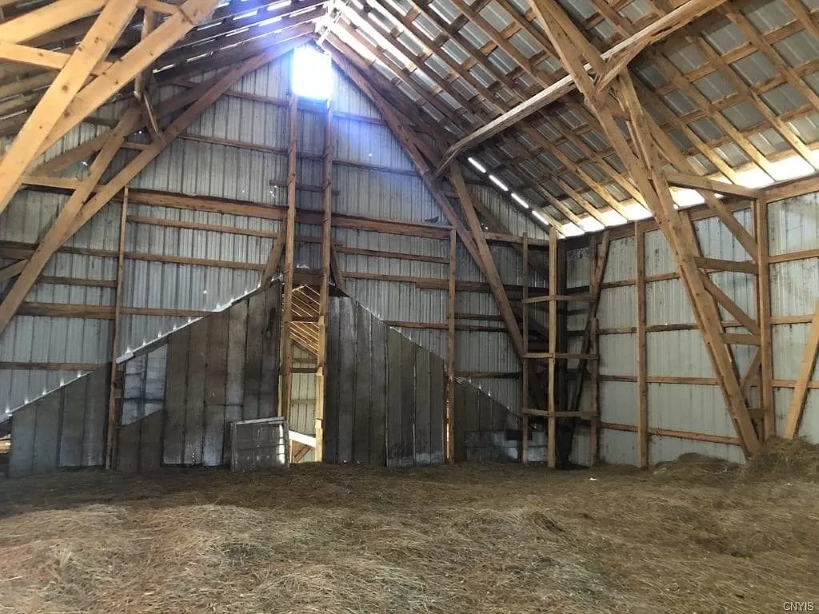 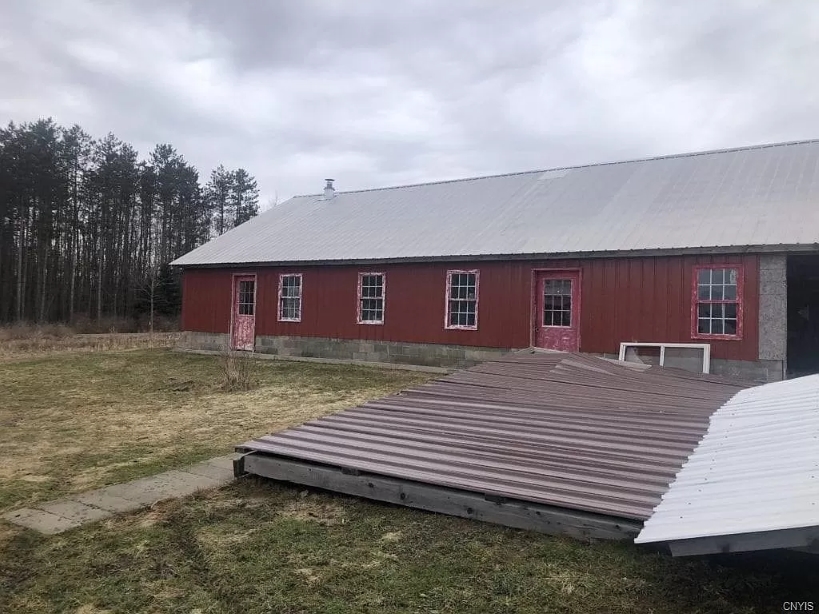 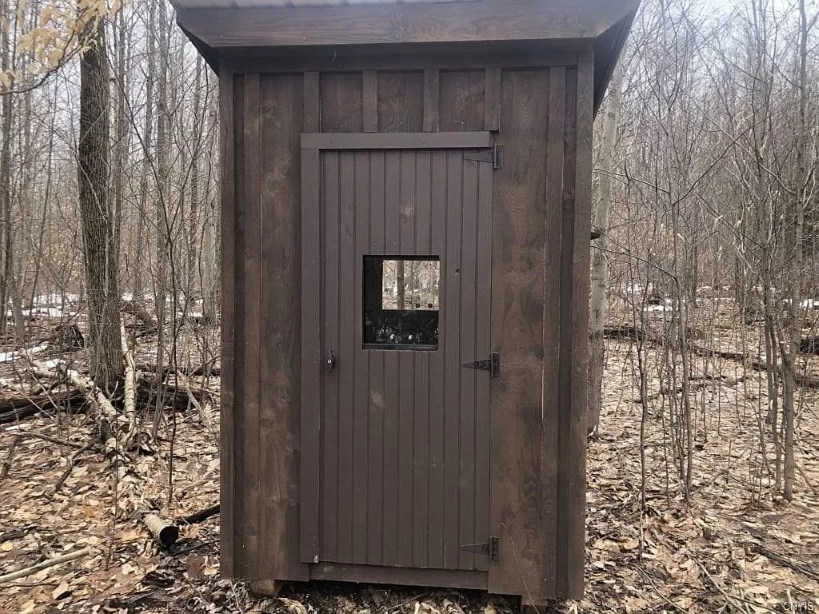 The property layout. It appears to be the sections in red – the larger farm chunk with fields, and a plot of forest land: 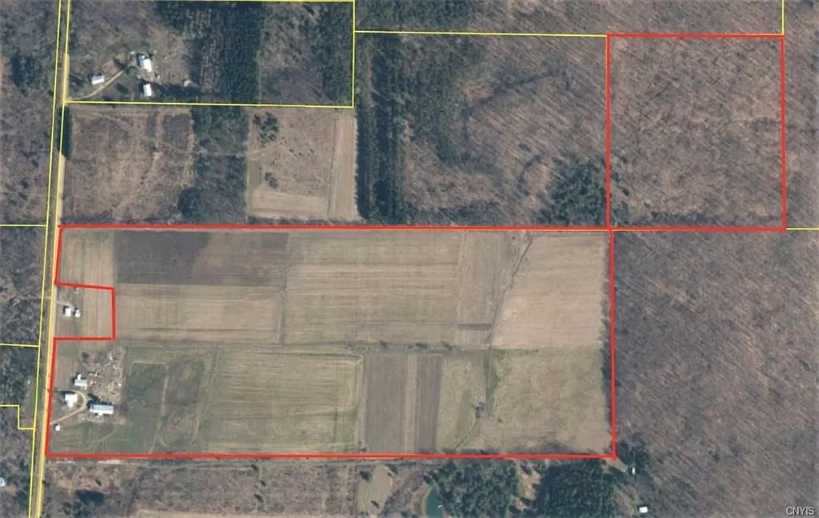 So what’s the price?

It’s listed at $150,000. On Zillow it’s described as “contingent,” so that means an offer has been made, but depends on certain criteria, like inspection, being met.