Why do Amish restrict tractor use?

Spring is here, and that means plowing and planting time.

Most Amish do not use tractors in the field.  Some will keep a tractor for around-the-barn tasks, such as filling the silo.

Why do the Amish limit tractors? 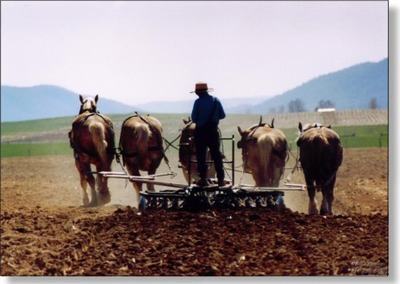 Part of the problem is their similarity to cars.

John A. Hostetler discusses the Amish mindframe in Amish Society:

‘When tractors were first introduced on American farms, the Amish rejected them with the comments, “They don’t make manure” and “They ruin the land.”‘ 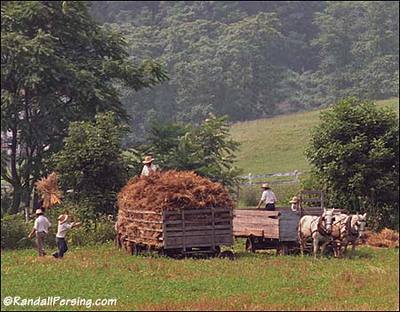 ‘Tractor farmers have greater convenience, more choice as to when they will till the land, and can get the job done faster than the Amish.’

‘Tractors, Amish farmers say, compact the land, which results in reduced yields.  Amish farmers who have bought land from the non-Amish have noted that the soil begins to work easier after the third year.’

No Mules in the Midwest?

‘Horse power’ may refer to actual horses, or to mules, which are especially popular among the Lancaster Amish.

A Holmes County, Ohio acquaintance mentioned that he had heard of one or two that were starting to use mules in his area.  But generally most Midwestern Amish stick with the big draft horses, the mighty Belgians and Percherons. 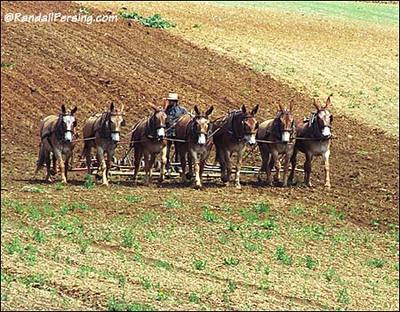 Hostetler says that Lancaster County Amish believe ‘that mules eat less and have greater endurance.  Such preferences appear to vary among farmers, as others consider mules to be more obstinate than horses.’

But it looks like there’s a deeper reason for the ‘mule taboo’ in the Buckeye state:

‘In Ohio, raising mules was forbidden by an Amish Ministers’ Conference in 1865 on the grounds that it was “improper to mix the creatures of God such as a horse and donkey by which mules arise, because the Lord God did not create such in the beginning.”‘

I wonder if Ohio Amish still feel the same way about mixing species, and particularly the dog breeders–ever hear of a ‘puggle’ or a ‘labradoodle’?