I resisted Facebook for a good while, but finally got a profile back in 2009.  Since then, I’ve often thought about the above question.

What got me pondering this today, though, was an article in the Pittsburgh Tribune-Review (“Amish learn value of networking”).   Amish are using social networking to market their products, with the help of third parties.  PA Amish farmer and co-op member Aaron Schwartz explains:

“We’re farmers. This is what we do and what our families have always done,” Schwartz said. “But we knew nothing about how to spread the word about what we’re doing, and we could only distribute as far as a horse and buggy would take us. This has really changed everything.”

What has changed things is partnering with an English marketing team, as Amish often do.  The Amish involved are careful to maintain the lines, though:

The co-op has started a Facebook page and has a Web site. Though members understand the need for modern technology to communicate, they aren’t always comfortable with it, Bartels said. A brochure for the Community Supported Agriculture initiative indicates Clarion River Organics prefers that subscriptions are paid by check or cash and that people sign up for the service via the mail instead of the Web site.

“We’ve had some difficulty figuring out how to meet the customer’s expectation of online presence while respecting this group’s aversion to that,” Bartels said. “The decision has been to make it clear that none of the farms are directly online, and we don’t put personally identifying information online that would give any impression that the Amish farmers are involved in the Internet.”

So while Amish aren’t yet starting Facebook profiles en masse, it looks like the social tool is at least making business better for some Amish.

We English of course use Facebook in the same way.  Companies promote themselves on ‘fan pages’.  People sell products, promote causes, and push traffic to websites all through Facebook.

But Facebook is first and foremost driven by the idea of connections between people.  We friend each other, and can now ‘like’ just about anything with the click of a button, instantly sharing with our online pals. 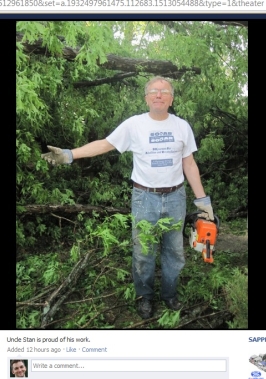 It all sounds pretty nifty.  But has Facebook made life better?  When I first got on, I was amazed at how many old friends popped out of the woodwork.  Friending someone on FB even led to a real-life meeting or two, with people I hadn’t seen in ages.  A good thing, I would think.

It’s also a handy way to shoot someone a quick message, even easier than email in some cases.  Or share photos–I viewed shots of my uncle’s obliterated yard after the tornadoes in Raleigh, NC, last month.  It was pretty neat to see photos of my Dad cleaning up the next day, in near real-time.  And so on.

Facebook of course has its critics.  Rather than connecting, it’s actually pulling us apart.  Substituting on-screen relationships for “real” ties.  And if you’ve ever been sucked into a “Facebook vortex”–clicking from one link to the next–you know how much of a time-eater it can be.

Maybe it’s a question of drawing lines.  Aaron Schwartz and co. may have the right idea.  It’s easier when your community is all on board, though.

For me, the jury is still out.  What do you think–is life post-Facebook better, or worse?

(…and the Amish America FB page!)