The Amish and Football 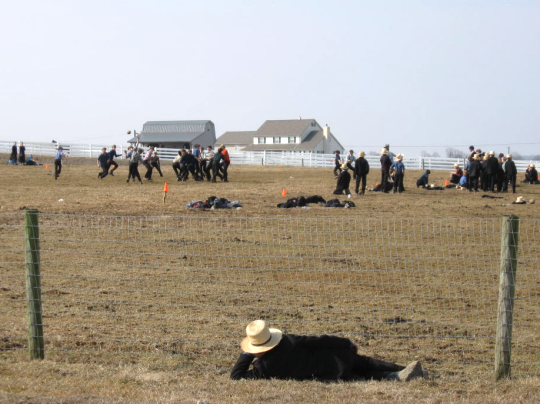 Well, here’s a bit of evidence that they do, courtesy of Rick Harrison, who took the above photo at the 2009 mud sale at Georgetown in Lancaster County.

While football is not as popular as softball or volleyball, the ole pigskin does get tossed around, especially by Amish boys.

Interest in the sport varies.  Some don’t care much for the game itself.  Some Amish don’t approve of sports in general, or at least not adult involvement in them.  I think reader Kerry might have a point when he writes that “it is generally considered too violent by the Amish, although I know many who love to watch and you will sometimes see the younger fellows hanging around the field fence on Friday nights watching.”

For that matter, you do find fans of the professional game.  The extreme popularity of the NFL (described by sports author Mark Yost as “the most successful sports league on the planet”) reaches into Amish society as well.

While spending a summer at Arthur, Illinois, I learned that local Amish tend to back either the Chicago Bears or St. Louis Rams.  In his book Growing Up Amish: The Teenage Years, Richard Stevick describes the room of a 19-year-old Amish youth.  Walls covered with photos of Pittsburgh Steelers players and numerous Steelers hats and a jacket revealed the young man’s loyalties.  “Such a room would be extremely rare in a small or conservative settlement or affiliation, however,” Stevick notes.  A couple of years ago, an ESPN reporter wrote a story on Amish Philadelphia Eagles fans in Lancaster County, which he didn’t have much trouble finding, at least among the youth.

No telling how many will be following this weekend’s NFL playoff games.