Some Amish first responders are using motorized scooters to get to the firehouse faster. 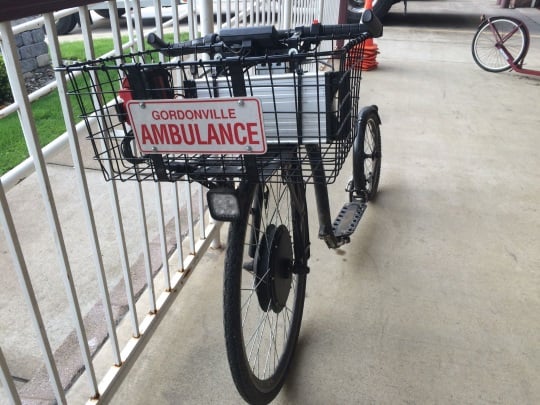 As you may know, Amish are significantly involved in volunteer firefighting and emergency response in Lancaster County.


More on what makes this machine different from the typical Amish scooter:

This scooter, as the placard states, is owned by a volunteer with the Gordonville Fire & EMS Co. He is an Amish EMT who happened to be attending an Intercourse Fire Co. benefit breakfast when the picture was snapped.

If you look closely, you will see accessories that do not appear on the standard Amish scooter made by Groffdale Machine Co. in Leola, the largest big-wheel scooter manufacturer in Lancaster County.

A strobe light is attached below the basket. When turned on, the flashing white light signals approaching traffic to get out of the way because the scooter’s rider is headed toward a fire or other emergency situation.

Now look closely at the hub of the front wheel. That’s a motor attached there. The motor, in turn, is attached to a rechargeable battery pack filling much of the bike’s basket. The battery powers the motor, which drives the scooter at about 25 mph. A battery typically propels a scooter about 12 miles before it must be recharged.

An Amish volunteer firefighter or EMT needs that extra boost to get to the station on time.

“They want to be there quick,” says one of the Scribbler’s informants. “These guys on scooters can’t get there as fast as guys in cars, but they get there pretty fast.”

The number of Amish using these is estimated as “dozens, if not hundreds”.

The price tag is about $1,000, financed by the fire companies. 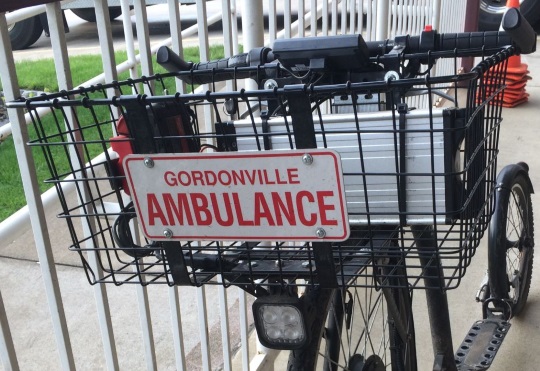 A closer look at the strobe light and battery pack

But you may be wondering, how does this fit with the Ordnung? The Scribbler had the same question:

But motorized scooters also are relatively fast. What do the bishops think of them?

“The bishops are sort of negative about it,” says one informant. “They’re working hard to get them put away.”

But this informant wonders how a bishop would feel if his barn were burning. Wouldn’t he want firefighters to get to the firehouse faster?

The article notes that these are particularly popular among younger Amish volunteers, some or many of whom you’d presume to be still unbaptized. In that case it would be harder to discourage their use.

Some young schoolteachers apparently use them as well, for the cost savings versus keeping up a horse and carriage.

I can see the bishops’ concern. If a form of motorized vehicle creeps in – even for noble and hard-to-argue-against reasons like helping first responders potentially save lives – maybe this becomes the norm for regular-use situations in a generation (or sooner). Then why not a motorized buggy, for other special situations?

Before we close, one other thing I learned from this column: some Amish go by horseback when emergency duty calls.

But it takes longer to saddle up than it does to hop on a souped-up scooter.