5 More Points on the Amish Population in 2014

We started the week talking Amish population–so why don’t we close doing more of the same!

While we’re on the subject, I recently did a guest post on Suzanne Woods Fisher’s website Amish Wisdom, called “10 Facts About Amish Communities“, which you might enjoy (you can see I don’t get tired of this topic 🙂 ). Some of them you might have read here already, others maybe not.

Unsurprisingly, the number of Amish settlements has also increased over the past year. According to reader Barbara Durham, one new community has been started in the area of Whitehall, New York (near the Vermont border). 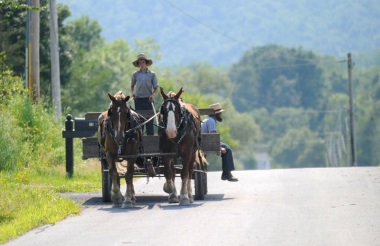 Baked goods, flower nursery, and a leather repair shop are the new offerings from them to the community. I also see over on Abair Road that they have some kind of sawmill at work. They purchased 3 already built homes, which they are occupying, this included the farm-land and barns. Cows are daily enjoying the high grass of the fields and you can see their crops peeking up through the plowed fields as well.

New York remains the state with the fifth-largest Amish population, at over 16,000. The state also has the third most settlements, with 50 (trailing only Ohio and Pennsylvania).