A reader shares the following thoughts on his friend Ada, an Amish quiltmaker.  Per request I have changed people/place names and one minor detail. I liked this:

It never ceases to amaze me at the openly honest and frank relationship I have with my friend Ada.  She is the daughter of my first real friend, her father Reuben who passed away a few years ago.  She now lives alone in the daadiheiser and is the premier quilt maker in the community. 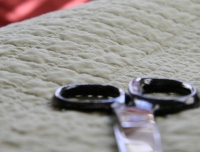 I commissioned her a few months ago to make a baby quilt for my soon-to-be-born grandson.  Yesterday I got a note in the mail from her telling me the quilt was ready to be picked up.  I supplied the materials and she the labor, the value of which she placed at a ridiculous $50.  Of course, being an anxious sort, I rushed over to Brownville today to pick it up even though my first grand is not due for another five weeks.

During my visit with Ada she told me about a new family moving in to the Hermans’ place.  I said something about her people moving here and there all the time and asked if she was planning a move.  She said “no, I like Brownville better than Cherry Hill, not as many people watching and looking at you all the time.”  I followed with a question about all the English who visited Cherry Hill and was that what bothered her.  “No” she said, “all those other Amish!”  She continued, “You can be too close too much of the time.”

Then a conversation ensued about how her nephew Olen’s furniture business was doing.  (Her father, when I was left alone with him while Ada ran errands and she would ask me to watch him while she was gone, would trash talk poor Olen.)  Her only comment was “Well, he is staying busy but then he better be since he has so many children to feed.”  She added that he doesn’t charge enough for his work nor does her brother Rudy for his machine shop work.  At that point I said “And look who’s talking, $50 for all that work on my quilt?”  That evening I was overcome with quilt guilt and placed a little more cash in the mail to her knowing that if I tried to put it in her hand she wouldn’t take it.

When asking about how her niece Martha was getting alone, I commented that every Yoder I know are as nice as they could be and there were no rotten apples in their family barrel.  She just looked at me and grinned saying “Yep, everyone of them be but me.”

As I was leaving I told her that I am going to take a photo of my grandson wrapped up in this nice quilt and show it to her and I could care less if she doesn’t like photos.  I proclaimed this is my quilt and it will be my grandson in the photo.  She just laughed saying you can do what you will with it, it isn’t mine any longer.