You’d hear these words often enough in Amish homes, with their ever-expanding families. 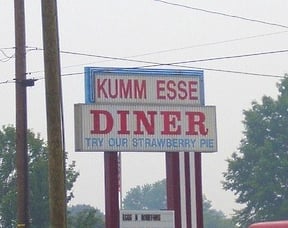 Is Pennsylvania Dutch alive and thriving? Well, it depends where you look.

Patrick Donmoyer and Douglas Madenford are two trying to keep the tongue going into the 21st century and beyond.

Donmoyer is director of Kutztown University’s Pennsylvania German Cultural Heritage Center, while Madenford might be described as an evangelist for the language.

Madenford grew up hearing Pennsylvania Dutch on a family farm. He says he speaks only PA Dutch to his preschool-aged children.

Madenford also has a series of Youtube videos teaching the Pennsylvania Dutch language.

In the article, the two share the background of the language, and the story today.

Here are 5 interesting things from the article:

If you’ve never heard Pennsylvania Dutch, here are a few samples for you. First, an Amishman conversing with a High German speaker:

Here’s a woman counting to 10 in Pennsylvania Dutch:

And if you understand German, here is a documentary on the language:

I’ve only managed to learn a few words and phrases in the language. Basically, so I can communicate with Amish friend’s children aged 6 and under.

Amish children typically begin learning English when they start first grade, though some of them pick it up sooner if they’re around it enough.