Getting their start in late February, there have already been about a half-dozen mud sales this year. Mud sales are auctions held to generate income for the local fire companies in the Lancaster County area.  They get their name from the condition of the ground in the late winter/early spring when they are traditionally held.  And this is real mud we’re talking.  From a Pittsburgh Post-Gazette article on the sales:

Bart Fire Chief Dave King said that a few years ago, before the new firehouse and its paved driveways were built, “There were some areas around here with mud as much as a foot thick. Once in a while we’d find a shoe stuck in the mud.” 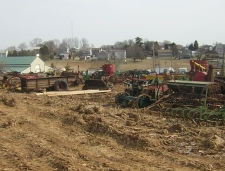 Mud sales are heavily supported by the local Amish population, who “easily made up more than half the crowd” at Saturday’s Bart Fire Company Sale. Which shouldn’t be a surprise, since a significant number of Amish serve on the fire companies themselves.  I recently learned the 14-year-old son of a friend has ambitions to do so.  This is apparently the age when you can start your training, which he has done with no lack of youthful gusto.

Mr. Fisher, 62, with a long gray beard, has been a fire company volunteer for several decades. He said the fire volunteers, Amish or English, get along well and talk freely among each other.

“We’re all human, and there’s no reason we can’t communicate and work hand in hand,” he said. The annual auction, he said, “is great for the community. It gets us to work together.”

This past Saturday was a big day for mud sales, with four happening that day alone. The next on the slate will be this Saturday (March 23rd) on behalf of the Gap Fire Company. Up for sale that day: Sporting goods, windows & doors, new & used furniture, quilts, crafts, dry goods, groceries and more.  For more info, here’s a 2013 mud sale schedule.

A few years ago, reader Rick contributed some photos and stories from mud sales at Rawlinsville and the Bart/Georgetown area.

On the Rawlinsville sale, Rick shared:  “I saw the antiques and farm machinery day, mostly the antiques since that is my interest. I remember an older Amishman that seemed to bid on every cast iron skillet that came up, but he knew his limit and may not have gotten any – I felt bad for him.”

Rick added on the Bart sale:  “The quilt sale was fun to watch, with a mix of Amish women bidding on tops they would finish and re-sell I assume, and English – I believe the one woman bought several for $1000+.”

Ever been to a mud sale?