This is a story about Dinky’s Auction House in the Amish settlement in Daviess County, Indiana. It contains an intriguing detail which goes largely unexplained. There is a photo showing a buggy described as the “First Air Conditioned Top Buggy” (below). 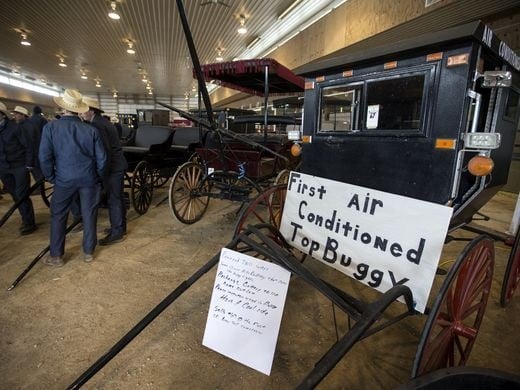 So this is something I’ve never heard of before. We’ve discussed heating in buggies. We have seen solar-powered buggies. But the air-conditioned buggy is a new one.

Is this a joke? It doesn’t seem so. The photo is accompanied by the caption “An Amish buggy with air conditioning was set to be auctioned at Dinky’s.”

As you can see there is a placard with what appears to be a description of this buggy in the photo. I tried to enlarge it, but the photo is too small to make much of it out (I think I see the words “Cool ride” – maybe one of you with sharper eyes can do better than I did).


It’s possible this might be permitted for someone who is elderly or with a medical condition. It gets pretty warm in southern Indiana. There have been cases where some Amish with medical conditions have had air-conditioning in their homes. 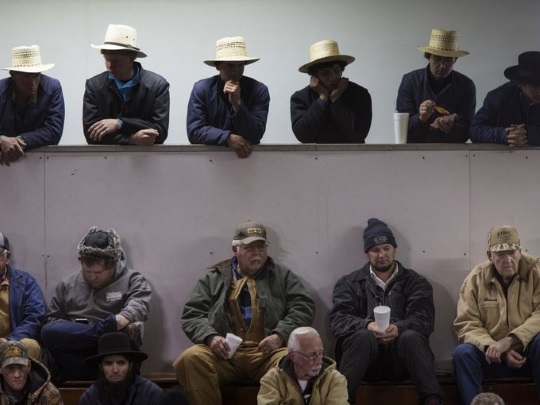 The rest of the article is a look at the auction house which has a two-decade-plus history:

It all started 22 years ago when John Lengacher had a vision. Lengacher, owner of Daviess County Metal Sales, noticed that his employees would disappear on certain afternoons.

“I found out they were going to an auction barn in Mitchell, Indiana. They sold everything, calves, goats, antiques, etc. There was no auction house in our area and I thought It’d be nice if we had an auction here too,” Lengacher said.

He had the idea but needed a place.

As Lengacher explains it: “Jake ‘Dinky’ Stoll was a Mennonite man with two daughters. … His nickname came from a creek that ran through the property.The girls got married and he passed away. His 40 acres were dead center in the middle of the Amish community, but not for sale. I made arrangements to meet with them. They showed interest and lo and behold (the daughters) sold me the acres. As it turned out they loved auctions too.”

But Lengacher points out: “If you want someone to remember the name of a business, it has to be short, simple and memorable. … When we put (Dinky’s) on the building, and it was instantly a household name. We didn’t even have to put an ad in the paper.

Dinky’s is well-known nationally attracting Amish from around the country. I remember when I was selling books in this community, you could hardly catch anyone at home (the men anyway) on Friday nights because they were “down at Dinky’s”. The three-day spring sale is a big event where you can purchase buggies, machinery and more.

You can read the rest and see other photos here. Here are a couple more (photos by Pat McDonogh – Courier Journal). 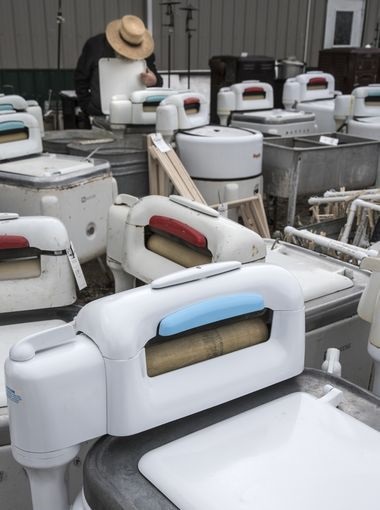 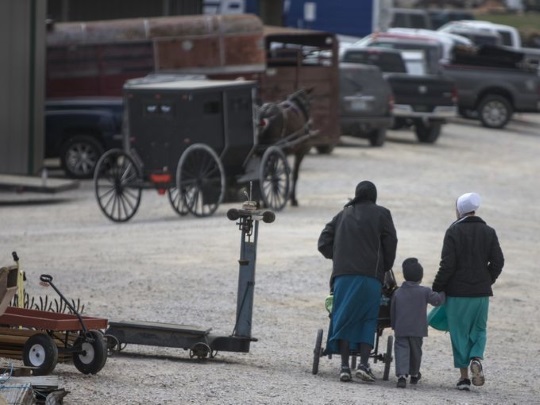