Michigan Live reports that an Amish toddler was killed on the road Wednesday in Hillsdale County. According to the Sheriff’s Office:

a 56-year-old Pittsford, Mich. man was driving his 1999 Chevy S-10 pickup truck northbound on S. Bird Lake Road south of Tamarack Road when the child walked across the road at the crest of a hill. The 56-year old man stated he tried to swerve to miss the child then began to start braking.

The driver struck the child, and came to a rest down the road. He then got out of his vehicle to help assist the injured child, according to the release.

The child was pronounced dead at the scene by Hudson EMS. The accident remains under investigation. 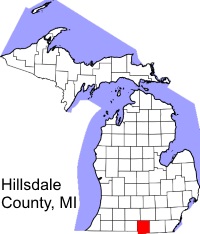 Another report describes the child as a one-and-a-half-year-old. There are few details other than that.

As in the recent stories of an Amish 6-year-old killed chasing a windblown hat, or another boy struck and killed while sledding, Amish children are at special risk of traffic accidents.

Compared to non-Amish children, their risk is elevated due to a number of cultural factors.

And while the buggy SMV triangle issue gets a lot of attention, should the safety of Amish children on and around the road be of even greater concern?

Why are Amish children at risk on the road? There are some exacerbating factors here as it relates to Amish culture and communities:

On this point–to state the obvious–Amish parents are certainly concerned over the safety of their children. 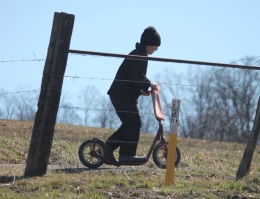 Any casual visitor will pick up signs of this: “Slow-Children At Play” warnings posted on lanes (especially if a business is located at the home), or children wearing bright safety gear while walking to school. In some cases Amish children ride buses, or parents pay drivers to take them to school.

But as we’ve seen so often, the Amish have diverse approaches to many things, including safety. Safety gear acceptable in one church may not be in another (assuming, of course, that safety clothing makes a significant difference).

What can non-Amish people do?

Some Amish take the stance that it is God’s will that accidents happen. Other Amish seem to incorporate that idea, while taking more material steps to preserve safety.

English people also have a role to play. We often like to think we can control everything. God knows we’ll never prevent every accident.

But keeping in mind that the above factors are in play–and keeping a watchful eye when driving in Amish communities–may help prevent some of them.

What do you think? What other ideas to keep in mind? What else can help improve safety for Amish children?