A controversy has erupted in a small New York Amish community (near Marathon in Cortland County, 1 hr S. of Syracuse) over busing of Amish schoolchildren.

New York state law requires busing to be provided to private school students as well as those attending public schools. This would include the local Amish community. 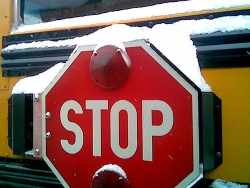 The issue has to do with Amish kids mixing with non-Amish children.  Amish parents wish their children to be bused separately. Local authorities are saying no.  From the Syracuse Post-Standard article:

Last school year, the district did provide separate busing for Old Order Amish. In the fall, a new school superintendent and the Marathon school board refused to make special bus runs for nearly 55 Amish students. It’s expensive and sets a bad precedent, school officials say. The district has offered to bus Amish and non-Amish students together.

The Amish aren’t happy. Amish parents say they don’t want their children influenced by non-Amish culture — things like clothing and technology and language. They fear their children would be bullied over differences, such as dress: black slacks, jackets and hats for boys and simple long dresses and bonnets for girls.

A couple of things struck me.  First, it’s unusual to find Amish children being driven to Amish parochials schools by public buses. Off the top of my head, it happens in communities in Indiana, and I’m not sure where else.  Some Amish children do ride school buses to public schools, but that is a different situation.

Most Amish children walk, scooter, bike, or take horse-drawn transport to their parochial schools.  Those schools are typically within close proximity to their homes.  The total number of Amish schools in North America is fairly similar to the total number of Amish church districts.  If an Amish community is, say, 10 church districts in size, you’ll probably find around 10 Amish schools there.

Amish schools rarely exceed 2 rooms, maintaining a small scale and meaning new schools must be built as a community grows.  When Amish children travel to school, they will take less-traveled, safer routes if they are a reasonable option, which may mean walking across fields, for instance.  In some cases, as when a family lives somewhere requiring travel along busy roads, children go to school with a hired English driver.

In the Marathon community, school access complicates things.  Weather is a factor, with harsh upstate NY winter conditions creating danger.  Children must travel a busy highway to get to at least two of the area’s three schools.

The school board notes the danger, with this quote from president Floyd Parker: “When the snow’s blowing, it ain’t safe…The last thing we want is for any one of their kids to get hurt. That road is treacherous, especially where their school is.” 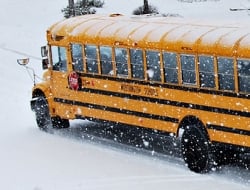 My first thought on reading this was that I’d expect the Amish at some point to back down and find an alternate means of transport, as it seems they have been doing (English sympathetic to their situation have been volunteering to drive the Amish children).  Parker notes strife over the issue in Marathon: “This community is as divided as much on this as anything in the 50 years I’ve lived here.”

Use of “demand” may simply reflect local attitude and reaction to the controversy, which has persisted for at least the past three months.  While there is typically goodwill towards Amish neighbors (and which still seems to be the case among a sizable contingent in Marathon), real allowances made for Amish and other religious minorities–sometimes combined with misconceptions–can lead to resentment among non-Amish.

That said the Amish in question may really feel entitled to separate busing in exchange for their tax dollars and economic contribution to the community.  The article notes how the influx of Amish has been an economic boon to the area.  Amish have also taken an active approach, pressing their case at school board meetings.

What about compromise?  In other NY communities, agreements have been reached–transporting Amish and non-Amish children together, for instance, but refraining from playing the bus radio during those times.

New York’s Amish population is quite diverse, ranging from fairly progressive to quite conservative.  I don’t know much about the Cortland County group.  But it is probably on the more conservative side (one indication: the Cortland County group uses off-site cooling stations rather than cooling milk on their own property, a sign of a more technologically conservative church Ordnung).  This may make such deals less acceptable.

This case leads to some interesting questions.  It’s another example of a religious minority group’s values clashing with those of the majority culture, which we’ve seen often over the past few years (ie, over the SMV triangle or electronic tax filing).

Should Amish, especially conservative Amish, even mix to this degree with “the world”, by accepting public transport (even though they may pay school taxes)?

If so, should they pay an extra fee of some sort to offset the additional cost of busing?

Should local government do more to accommodate the Amish, who have obviously benefited the area economically?