RICHLAND, N.Y. — Black horse-drawn buggies were parked outside a wooden house where Amish people were crowded inside — laughter and the smell of food spilled out of the front door Saturday afternoon.

When Levi Swartzentruber came to the door though, his green eyes watered at the mention of his 6-year-old son Jonathan L. Swartzentruber.

He died after being hit by an SUV across the street from his home Friday.

State Police in Pulaski said the boy was chasing his windblown hat across county Route 2 when a man driving a 2002 Dodge Durango hit him.

This is the second death of a child in the area in the past few days. On Tuesday, a 13-year-old boy was killed while sledding down his family farm lane into the road. 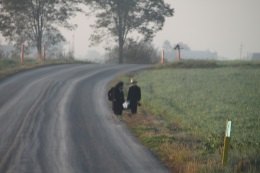 Though it sounds like neither driver was at fault (both tried to avoid the children), I took these stories as another reminder when driving through Amish communities: it’s not just the buggies or scooters to be aware of.

Amish communities are full of Amish children. Even though they’re taught to be careful around the road, children are children and accidents will happen.

Thoughts and prayers for the families.