Amish folks, like the rest of us, enjoy hearing the odd bit of trivia or unusual fact.  Hence, three tidbits of Amish trivia, taken from Brad Igou’s compilation The Amish in their Own Words: 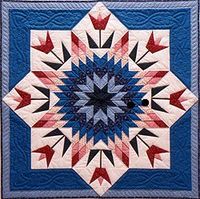 1.   Quilts. The Amish are well known for their proficiency in the quilting realm.  Some of their pieces fetch upwards of $1000.

The average quilt takes around 250-350 yards of thread.  ‘The Shetlers’ of Glasgow, Kentucky, hold the record–using 1,270 yards for a ‘big ocean wave’ quilt. 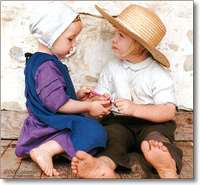 2.Old Age and Kids. The oldest Amish person was Salina Stoltzfus of Lancaster County, who passed away in 1981 at the age of 108.

Bennie and Annie Fisher had a 22-year gap between their first and second child–Noah came in 1924, John appeared on the scene in 1946.  Two more children were born after John, when Annie was 45 and 47 years old. 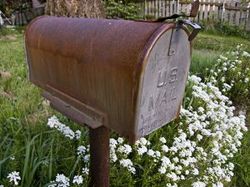 3.Circle Letters. Some Amish write circle letters, whereby a group is formed and each person adds a letter to a pack of letters that goes around and around a circle of around a dozen people, each adding his own and sending it on.

There is also the Ohio-to-Ontario ‘Andy Mast Circle Letter’–consisting of 14 Amish with the same name.

Leave a reply to Amish trivia