Will Low Milk Prices Force Amish Out Of Dairying? 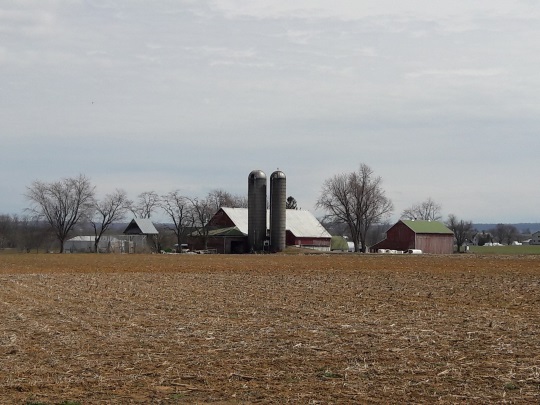 I sat down Sunday with a Lancaster Amish dairy farmer friend. He soon handed me a copy of local paper LNP, containing this article.

Low milk prices are making it tough to make a living on the farm. So some are selling their cows at auction.

“The first cow is Pepper. She’s got a good udder and 85 pounds of milk and ready to go for you,” barked the auctioneer to almost 200 Amish dairymen squeezed under a tent on a farm in southern Lancaster County.

Thus, on a gray and cold afternoon on Tuesday, 28-year-old Levi Stoltzfus Jr. watched as all 66 of his milk cows were paraded past bidders and sold one by one.

After three years, it marked the end of the dairy business for the Colerain Township farmer, who began a new job this week building sheds away from the farm.

His was the second public auction for a young Lancaster County farm family exiting dairy in a week.

Sam explained how they had weathered low prices before, citing 2009 as a bad year. But this four-year stretch of declining prices has been particularly long and hard.

It must be a gut-wrenching feeling as the your milk check slowly decreases in size with each passing month, while your considerable debt payments and expenses remain.


Sam is well-established as a farmer, with a couple of his children already married. But it can be tough for young farmers in particular.

A farmer’s success, Sam explained, can be in part a matter of timing – if you take on a lot of debt early by getting in at the “wrong” time, it can weigh you down for years. 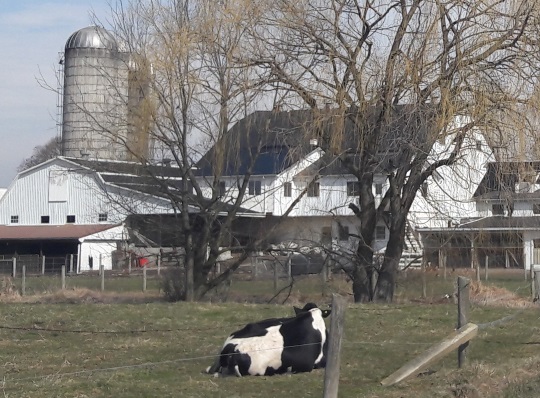 Sam is currently milking 61 cows, out of a herd of around 70. Like other Lancaster Amish, Sam also raises tobacco as a cash crop.

He recently began providing tobacco wrappers – a labor intensive process which means finding and packing only leaves without holes or other damage, to use as wrappers for cigars – but which brings a significantly higher per-pound price. Sam is contracted for several years at $5.50/pound.

That will help, and with several children still at home, Sam has the labor to make it work. But the Amishman has to hustle harder now, especially since he recently helped his oldest son purchase his own farm. On that note, he had to cut our talk short as 5 o’clock rolled around, with 61 udders needing to be milked.

On the auction, Sam pointed out that there are so many cows coming on the market, those selling their herds are getting depressed prices there as well. The Amish buying the animals are well aware of this, and bid with their neighbor’s situation in mind:

Most of the farmer’s cows were purchased by fellow dairymen, some of whom had come in solidarity to help out one of their own.

“I’d rather give him a decent price than take the cow home like I stole it from him,” said a neighboring farmer.

It has to be deflating for an Amish person to lose your vocation, especially something like farming that has been done by many generations before you. 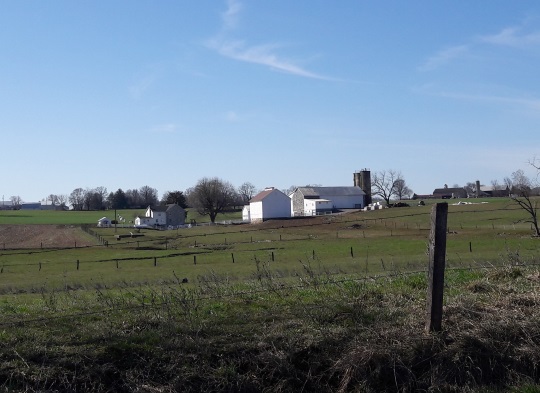 Those who came to the auction probably realize that, but for the grace of God, they could be in the same shoes:

After the auction, Stoltzfus said the sympathy and goodwill of the 260 almost entirely Amish bidders who rode buggies to the farm were palpable.

“I could just feel that. I didn’t feel worthy,” he said.

This hits emotionally on more than one level. Amish people develop an affection for their animals, which you can tell when they talk about their buggy horses, or in this case, a particularly special helper:

Stoltzfus was satisfied with the money he will receive from the auctioning of his herd, seven mules and milking equipment. But he said it won’t free him of debt.

He said the saddest part during the auction was watching the sale of Jewel, a 9-year-old red sorrel molly mule that was the lead mule in a team that plowed his fields.

“This here is a mule you do not find every day,” the auctioneer said as Jewel and another mule pranced up and down between two long rows of black-clad farmers.

The mules stopped on a dime, made graceful turns at the end of imaginary rows of corn and stood waiting orders in a gravel opening between two barns. Jewel sold for $5,600, more than any of the other six mules.

“I hope she performs for the other guy like she did for me,” Stoltzfus said Wednesday, right after the mule had been hauled away by her new owner. 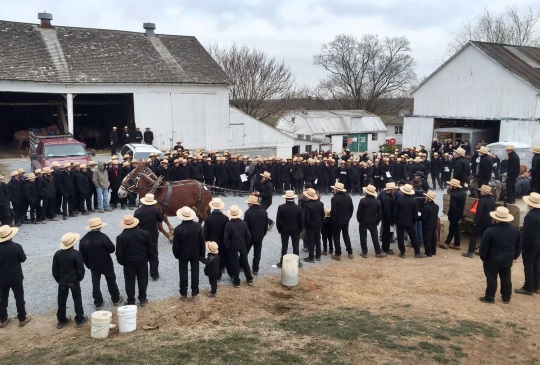 Mules at the March 27 auction. Photo by Dan Marschka

There are still plenty of active Amish dairies in the Lancaster community, easily noticed if you point your car and drive in any direction from Intercourse. But this phenomenon is likely most acute in this settlement, where land prices are sky-high.

Young Amish from Lancaster County who would like to farm either need financial help from parents or other sources, or look outside the community for land.

On that note, I drove another Amish friend to visit a farm they had purchased in a neighboring county – a bit distant from Lancaster, though an idyllic spot of land – where he plans to move in the next couple years. They sacrifice proximity to the community to have their own land. Hopefully more will join them, but it is a big move.

The article rather depressingly notes that some experts predict a “major exit” from dairying across Pennsylvania – this year.

I don’t expect the iconic Lancaster Amish farm to totally disappear. But farmers are having a tough go of it, with some life-changing effects already.