Amish Acres Properties Sold For Over $4 Million; May Continue As Attraction (Updated)

Amish Acres was portioned off and sold at auction yesterday in separate parcels after the owners tried and failed to find a buyer for the entire property. One set of buyers purchased the “entertainment center” containing the famous Round Barn Theatre, restaurant, and other buildings. Another tract containing the hotel was sold to a different buyer. So it looks like there is a chance that the attraction will continue in some fashion. From the South Bend Tribune:

NAPPANEE — It appears that the Amish Acres complex along U.S. 6 could remain as a tourist attraction after the results of Wednesday’s auction of the 28-acre property.

Hundreds of people braved the snow Wednesday to watch or bid on the property that was developed into Amish Acres over a 50-year period by Richard “Dick” Pletcher and his family.

The auction garnered a total of $4.255 million for all the components of the property that was divided into tracts for the sale.

Perhaps the most important sale was the entertainment center tract that was sold for a bid of $1.55 million to Marlin Stutzman, John Kruse and Jason Bontrager. That tract included the Round Barn Theatre, a 400-seat restaurant, two historic log cabins and other buildings.

The tract that included the hotel was sold for the winning bid of $1.3 million. 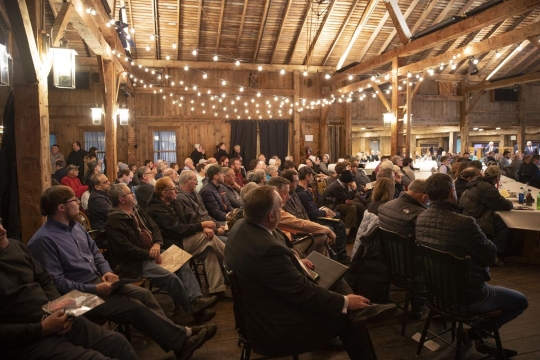 Amish Acres closed at the end of 2019 after a 50-year run under ownership of the Pletcher family. The property has historic value, with some buildings being listed in the National Register of Historic Places. The Pletcher family would like to see someone carry on the business in some form and are willing to help make that happen:

The Pletcher family is retaining the Amish Acres name in the auction as well as the many thousands of souvenirs, equipment and furnishings that still fill the buildings as if the attraction is just closed for the season.

A native of Nappanee, Pletcher has said he plans to remain in town and is willing to lend his assistance as well as the Amish Acres name to a person who would maintain the spirit of the attraction.

Many who’ve visited this place over the years, along with the community of Nappanee, surely hope that happens.

Another report says that the new buyers are “excited about continuing the legacy.” From WSBT:

People in Nappanee are breathing a sigh of relief.

The auction of Amish Acres resulted in the property being split into sections and purchased by six different buyers. The restaurant and theatre are not going anywhere.

The buyers say they’re excited about continuing the legacy. Not only do they plan to use the Round Barn Theatre and Restaurant, but they will also hold the annual Arts and Crafts Show that takes place in August.

“We want to build on the legacy that the Pletcher family has built here for decades,” said John Kruse & Marlin Stutzman, Bought restaurant & theatre, “and we want to help take what has been in the past and move into the future.”

Kruse and Stutzman say they have a lot of big plans for the property.

“These barns here have such great history, and the theatre of course is so unique,” they said, “so between theatre, music concerts, and food — and of course wedding spaces and event spaces — this is going to be a very, very busy place.”

They say they plan to have shows in the theatre and open the restaurant with a “farm-to-table” type concept.

“I think the real focus is we’re going to have world-class entertainment, a world-class experience right here in the heartland,” they said.

The buyers are all local to northern Indiana, which is probably a good sign here as far as continuing the business in a similar mold.