Who Is Who In The Budget Volume III – Winner & Excerpt 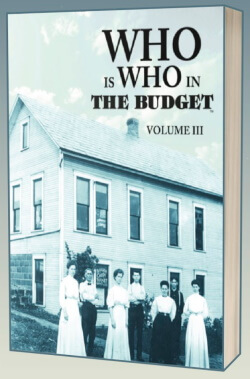 We have a winner of Who is Who in The Budget Volume III following our Q&A with Budget Publisher Milo G. Miller last week. Before we get to that though, a few excerpts from the book. First, an excerpt from Milo Miller’s Introduction:

This is an informative reference book solely evolved from The Budget Newspaper; which has weekly entries from hundreds of scribes who share news from many different communities throughout the Americas and beyond. Who is Who was born with the intention to let the readers of The Budget become more personally acquainted with the scribes.

The following pages contain over 600 entries from scribes throughout North America. These entries are from active scribes as of August 1, 2020. Since that point, The Budget has added new scribes and some have passed on.

In these submissions, the reader will receive insights into the scribes lives and the communities they serve through their letters. This new version of Who is Who will look slightly different than previous editions. Volume III is a question and answer format. A state map will accompany each scribe entry; which provides an approximate geographic location of each community. Another new feature is the mileage distance from the community to The Budget office in Sugarcreek, Ohio.

Each of the entries are in alphabetic order, first by state, then by letter heading. Canada follows the United States entries. Directly following the Canadian entries, you will find an index of all of the scribes in Volume III along with a section for those scribes without an entry.

Finally, in the Epilogue, you will find the story of The Budget and of the Ohio Scribe Gathering. Much of this history has never been previously published. In this book, you will also find historic photos and front-page images of The Budget. 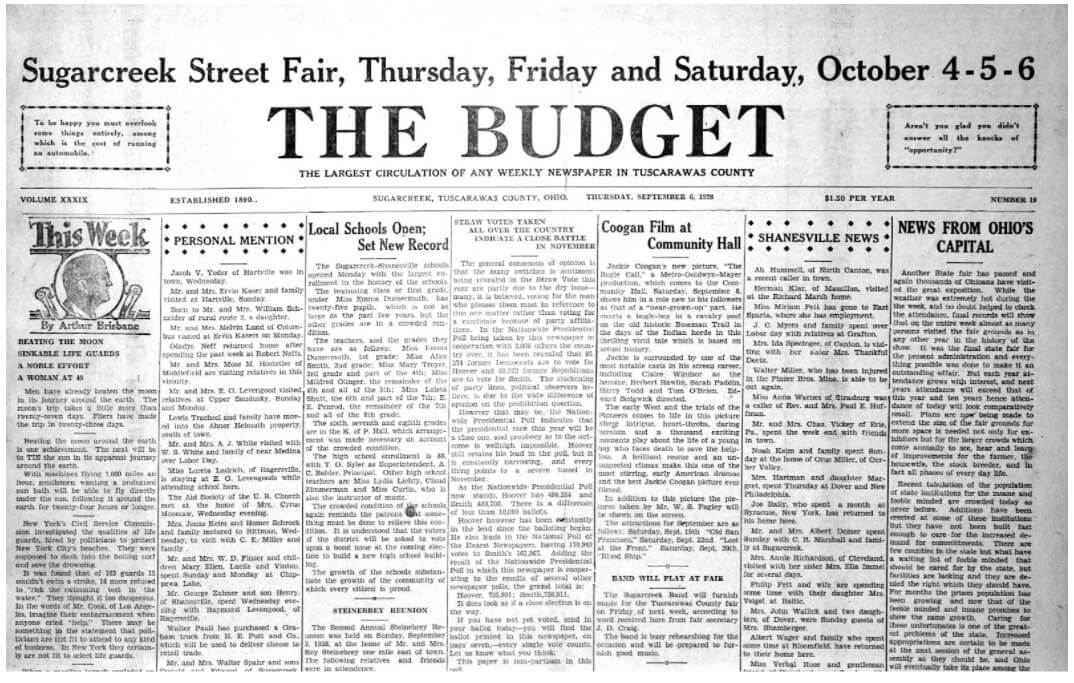 Front page of the September 6, 1928 issue of The Budget

This next segment called “In This Issue” highlights a few of the interesting entries from the book. Note that these aren’t the full entries themselves, this is just a section telling you about some of the actual entries and where to find them in the book:

There have been three generations of scribes that have been writing for The Budget from the family of Ina Weaver of Goshen, IN. At one point in time, Ina’s mother, Catherine Martin was a scribe while her daughter was also a scribe from MN. Learn more about the family on Page 48.

There is a long line of inksters that make up the lineage of Ida Anna Miller of Topeka, IN. She has been a scribe for 10 years. Her Mom, Mrs. Dan A. Hochstetler, also of Topeka, IN was a scribe for 50 plus years. Get caught up on the latest from Topeka on Page 70.

The visit of George Smith when he was the Editor of The Budget was a highlight for Mrs. Ben A. (Elizabeth) Coblentz who was a scribe from age 16 until her death in 2002. During that visit, Smith complimented the scribe on just how neat her handwriting was. You can learn more about Elizabeth’s daughter, Emma Schwartz of Burr Oak, MI, and her community on Page 132.

Of the stories that have been printed over the years, there is one that Sharla Miller of Spruce, MI likes the best. You see, there was a tale of a 6-year-old girl who decided the best way to cool off during the heat of summer was to sit in the cow’s water dish. What the storyteller, David Miller, the Snover, MI scribe, didn’t know is that in telling that story, he would create a connection to young Sharla, a girl who would eventually become his daughter-in-law and a scribe as well. Read about Sharla on Page 163.

While some of our scribes have written for us for quite some time, Naomi Mast brings to light the fact that her mom, Mrs. Alfred Troyer of Dover, DE, was a scribe from her teens to her 80s! Mrs. Troyer would give Naomi a taste of being a scribe now and then when she needed a substitute, and now Naomi is a scribe for the Orchard, NE area. You can find more information about Naomi Mast and her community on Page 213.

Now for a step back and as we dig into the history books a bit. Ray D. Miller of Glenmont, OH shared with us the lineage he shares with The Budget. His great-grandfather, Moses I. Hochstetler, wrote one of the first Budget letters to be printed in 1890. He also noted that his great-great aunt was married to Budget John. You can find out more about Ray’s family and the Glenmont community on Page 277.

From North East, PA comes the story of a baby born on January 1, 2013 that made the news. One of Audrey Hess’s daughters was the first baby born in 2013 in the area, and after some commotion and an interview, they found themselves on the news! Audrey has some information about the community to share, which can be found on Page 374.

While there were countless stories and topics that we wished to include in this list, we thought it a better idea to let you enjoy reading through and finding the rest.

Finally, here’s a segment on the early history of The Budget, including a history of its name changes and the beginning of the scribe tradition in the 1890s:

By 1891 letters began taking up much of the editorial space on pages 1 and 4 and subscriptions expanded outside of the Sugarcreek market. On the first anniversary in May 1891, The Sugar Creek Budget was sent to 79 post offices in Ohio, Indiana, Illinois, Michigan, Minnesota, Wyoming, Oregon, Colorado, Texas, Arkansas, Missouri, Tennessee, Maryland, Pennsylvania, and New York.

In the early years, John could be described as a “one-man-show”. In the October 15, 1891 Issue, John reported publishing delays due to this incident: “The reason for the delay is, that on Tuesday of last week while returning from Farmerstown on a buggy, behind a kicking horse, we thought it safer to jump out of the buggy, and in doing, we had our right arm broken near the wrist, which will keep us from work for several weeks.” 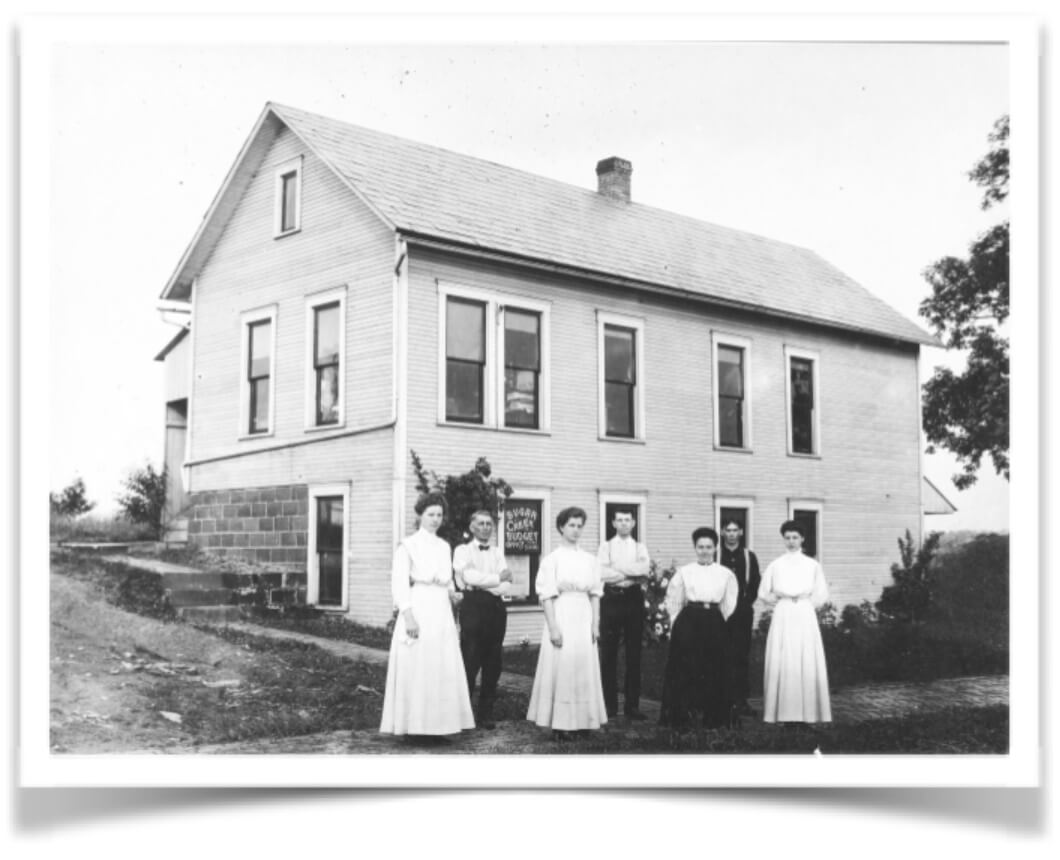 Publication resumed on November 5, 1891, and at that time, the name was changed to The Weekly Budget. With only minor interruptions, it has been published weekly ever since.

By December 1892, The Weekly Budget was being sent to 18 different states and 463 post offices.

During the 1890s, readers began sending letters to join the conversation. Many of these scribes would create their own pen names such as “Goose Quill,” “Daddy’s Son,” “Java,” “Don’t Blame Me,” and many others. Scribes would often provide their opinions on the national political climate, specifically with the 1896 presidential election between McKinley and Bryan. The political rhetoric continued through the tenor of McKinley’s presidency.

As settlements expanded and moved west, some scribes would pick arguments with other writers, specifically questioning why people would move west and homestead when there were many life conveniences in the east. It appears that many land companies and railroads noticed this migration trend. From approximately 1894 – 1910, many of the ads in The Weekly Budget were from these railroad and land companies; offering reduced and free train rides to prospective Amish Homesteaders. 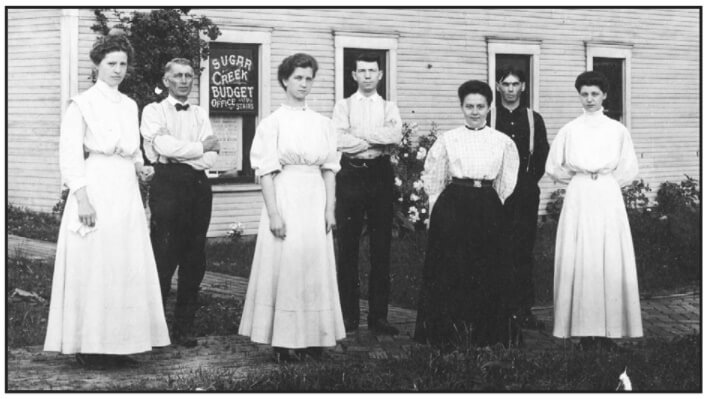 John C. Miller, known by that time as “Budget John” was passionate about his faith. He featured news of Bible Conferences, revival meetings, Sunday Schools and Bible Schools. In 1903 a regular column devoted to Sunday School lessons began. Mission’s also became a hot topic in The Weekly Budget during this time.

Who is Who in The Budget Volume III Winner

I used random.org to draw a winner from your entries. The winning comment was:

Congrats to you Deb. Please send a mailing address for your book to me at ewesner[at]gmail[dot]com. 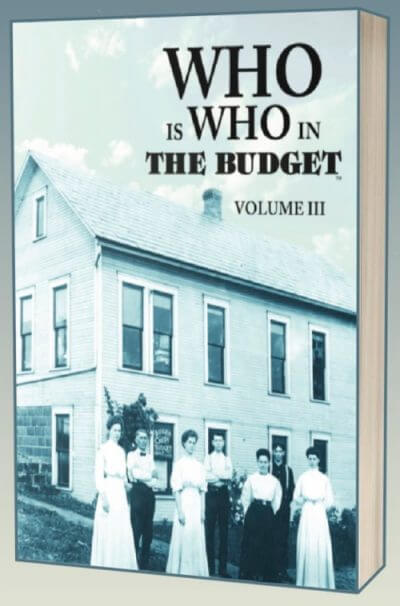 I hope you enjoyed the excerpts and a thank-you to Milo for sharing them with us. There are two days left (through Friday April 30) to order Who is Who in The Budget Volume III at the discounted price:

The easiest method for ordering The Budget and/or Who is Who in The Budget Volume III is by calling The Budget: 330.852.4634. We accept all major credit cards.

Now through Friday, April 30, you can order Who is Who in The Budget Volume III at a discounted rate of $20 per book. Please add $5 for shipping per book. Ohio residents please add $1.35 sales tax per book. Beginning May 1, the book price will increase to $25.