When a son joins the Amish: The only treasure you can take to Heaven

Anne is back with a new piece on her recent visit to her Amish convert son Ed‘s community in Minnesota.

When last we heard from Anne, she was describing why she felt like a wimp living Amish for a few days.

One thing the Amish have in abundance is children. It’s no surprise when they say their children are the only treasure they can take along to heaven.

Anne herself is blessed with two young Amish grandsons. She also had the chance to experience the children of other families in Ed and Ruth’s church.

Today, a few of Anne’s reflections on Amish children, at work and at play.

This morning on one of the morning news shows, the question was asked, “What’s the best age to give children a smart phone?” The answer? Between ages 10-14. I’m sure most of you on this blog would feel the same way I do about that kind of answer.

It struck me that as cultures, we are growing further and further apart, as modern Americans embrace even more complicated technologies, while Amish continue to put value elsewhere.

While we were with our Amish family last month, we had some experiences that put these differences in a clearer light. 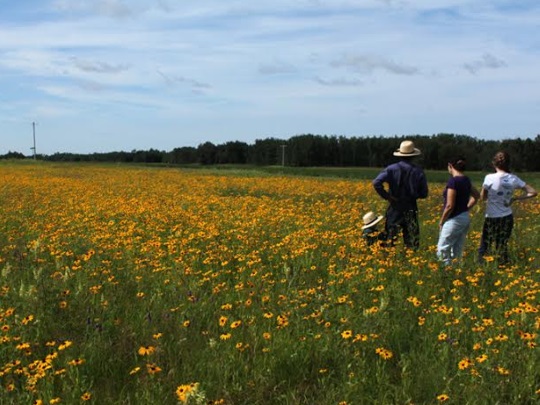 One evening we were invited to join another family for dinner. They have a gorgeous log home, and beautiful fields of produce carefully weeded and thriving. Part of the reason all looks so good is that they also have 10 children helping with all the work.

The eldest three are strong and capable girls, ages 21, 19, and 18. We were told that the three of them stripped the logs for the home when it was built, and if you could see them you’d have no trouble believing that, as the definition of “capable” seems to exude from them. 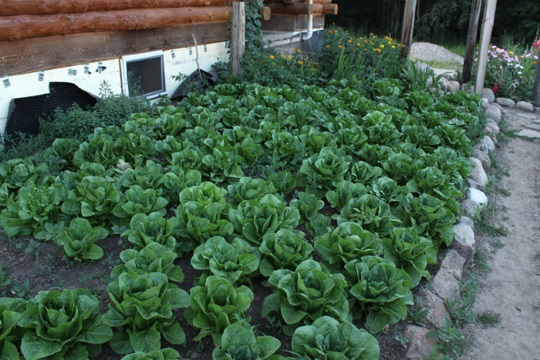 They are followed by several strapping boys who obviously have their fair share of muscle. So it’s no surprise to see the beauty of all this family owns, as they’ve got lots of focused energy to put into it.

When we first arrived at their house I regretted that we had forgotten the infant seat for baby. But after an hour or so of being there it was clear that it would have only been in the way; our little guy was passed from one person to another; everyone, guys too, wanted a chance to cuddle him.

And this continued into the fantastic dinner we had, and later on the walk we enjoyed together. The infant seat was literally never wanted! The walk afterwards was lovely, as we enjoyed their groomed fields as well as the large clouds building overhead. 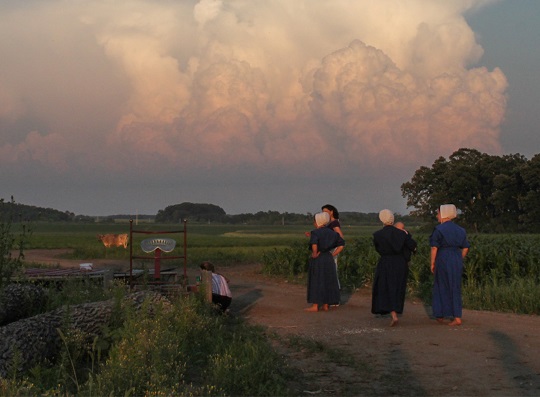 The family owns a small pony, similar to a Shetland Pony, though not quite the same breed. This little horse had just had a foal that was several weeks old.

Before we knew it, the kids had come up with a plan to entertain the small children by giving pony rides on the foal. The little sister, only 2, was put on its back and all were carefully guided around the field.

Our oldest grandson enjoyed being carried upside down OR on the big boy’s shoulders. And there was a game of “hide and seek” in the corn patch. Everyone was having a merry time on a beautiful evening, and for us it was a delight to see. 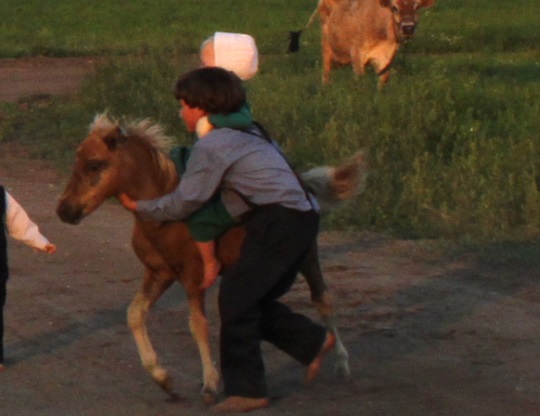 Keep in mind that these kids had ALSO just had a very full day. They had worked early and all day and then had extra chores as they prepared for our visit. None of them had digital devices; no one was slinking off to a corner to text or email a faraway friend, check out the latest pop music or play a video game.

Instead, these kids were closely connected with those immediately around them. It’s rare in our culture that young people know the value or satisfaction of good work.

Central to raising children seems to be the value of “entertainment”. But not so here; these kids work hard and play hard and the differences between our two cultures was in stark relief to me. 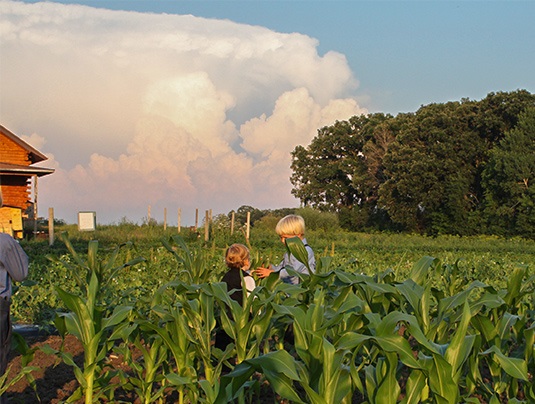 I noted that our first born grandson, only 22 months old, had a habit of following his dad around the fields to watch him work or hold a tool when needed.

Later, we received his help with dishes; from his spot perched on a chair he specialized in getting the silverware out of the rinse water into the proper place on the dish drainer.

I expected this to be a short-lived fun filled time for him to splash in the water and, in short, create more mess than he actually helped with. But it wasn’t so. He did his work seriously, but it was also clear he enjoyed it. 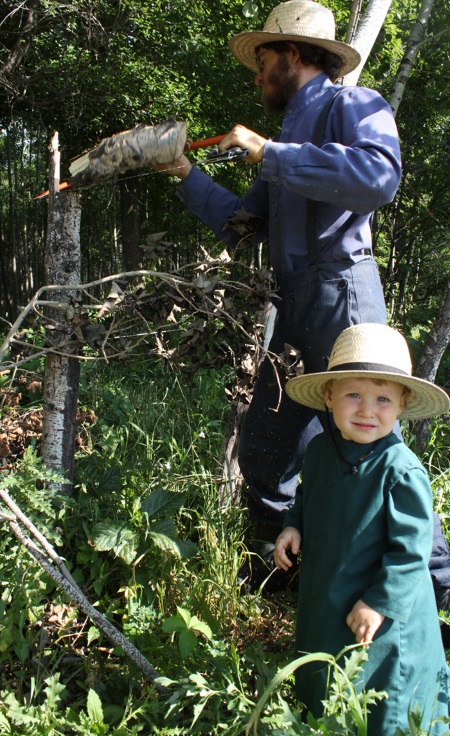 Another time, he took it upon himself to keep little brother entertained, as you can see from the next picture.

He made up a game where he would sit down (facing away) on the edge of the infant seat, tipping it way forward. Then he’d hop up, sending the seat rocking backwards!

Baby thought this terrific fun, lots of loud laughter coming from this 4.5 month old! Both boys were giggling away! And I was amazed to note that my not-yet- two year old grandson was already taking it upon himself to care for someone younger and more tender. 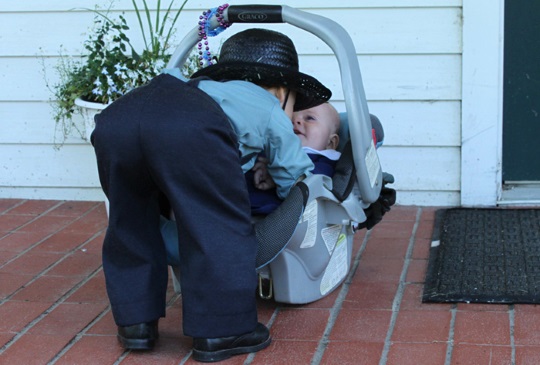 There are obvious differences between our cultures; how we dress, how we deal with church issues, how we get around, and lots more. But one of the more important things is the view of children and work.

For our Amish friends, the natural world is real, work is significant and relationships are critical. Though I’m not ready to become Amish, they certainly have wisdom modern culture has lost.