When a son joins the Amish: We are wimps!

One of our readers, Anne, has a son named Ed (not his real name) who became Amish a few years ago.

We hear from Anne from time to time in this ongoing series called “When a son joins the Amish”. 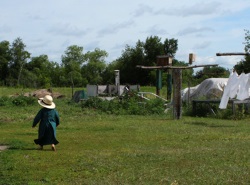 Anne’s grandson at home in Minnesota

Anne has previously written about the photo policy when she visits her son, a hard winter, her friends’ reaction to her son’s conversion, and dental problems.

Anne recently made the long journey from her Virginia home to visit Ed, his wife Ruth, and their two young children in their Minnesota community.

Today she outlines the stark contrasts between comfort in her own English world and her son’s very plain Amish one.

Anne’s post is a vivid reminder that Amish lives vary. Truth be told, quite a few Amish people would consider Ed’s Amish lifestyle “roughing it”.

Though they may all use the buggy and wear plain clothing, there is a gulf between the most traditional and most liberal Amish.

Ed’s community is definitely among the most traditional. Wimps need not apply.

Just packing up for our stay in Minnesota this time brought to mind how hard it was going to be for us to “be comfortable” living with my son and his family. And for a week! As my husband says, “it’s like camping out”. So we are doing this for our vacation this year?!? 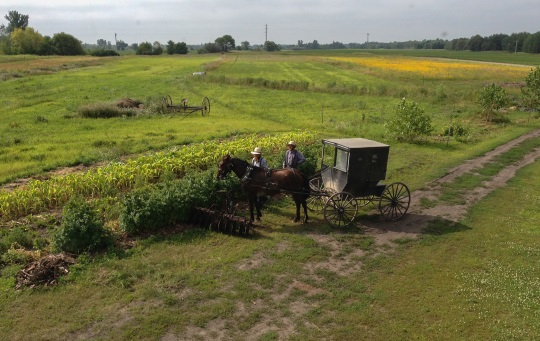 View from above. Amish life in Northwest Minnesota

Ed and his wife are probably among the poorest of the poor in any Amish community. They don’t have anything the rest of us would consider basic, like running water, electricity, or even a way to bathe aside from a tub or sponging off. We secretly looked at each other about the third day, and said, “What we wouldn’t give for a climate controlled interior!”

When we got there, northwest Minnesota was having warmer than usual weather. So imagine it being 94 degrees outside and the woodstove going inside. The woodstove goes all the time, because it’s not just a cooking device; it’s also the only way to warm water for cleaning. 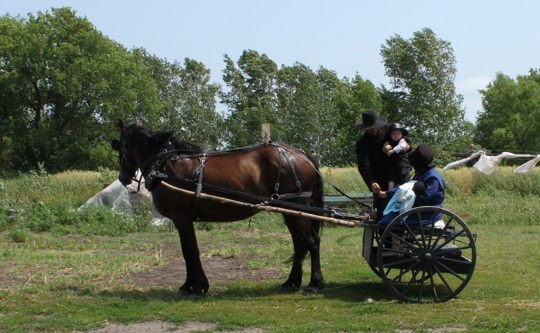 Ed, Ruth and children getting ready to go to church

We were lucky that day, as the winds were blowing, and so opening windows helped some. But the windows are rather small in this house, so the relief they offered was limited. It can be better than going outside though. Have you seen the mosquitoes in northwest Minnesota this time of year?

We jumped into “helping”. I’m not sure our help quite measures up to their standards, though they seemed very pleased at our attempts to do just that over the course of our stay.

The daily work consisted of, among other things, producing labor intensive meals, cleaning up after those meals, and finally settling for a much lower standard of “clean” than I’m used to. 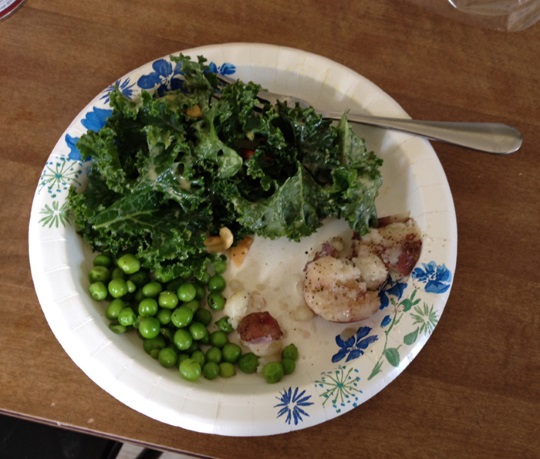 All dishes are washed in a basin in a small bit of very hard water. The water may be warm when you begin, but by the end of the stack, it’s cold, but there’s still more to wash. And by then, the water is super dirty! Rinsing goes the same way; use very little water, and by the end, its’ definitely not warm any more.

Fiona (my daughter) and I spent all day Monday assisting Ruth with laundry. They use a ringer washer that stands out in the yard. Each load gets 5 minutes (any more and you’d be spending several days doing laundry!).

Then you put it through two rinses, which means a total of 3 wringing events for each item. Then into baskets to carry over to the clothes lines where everything is hung to dry (again, the last loads are washed in what looks like anything but clean water!). 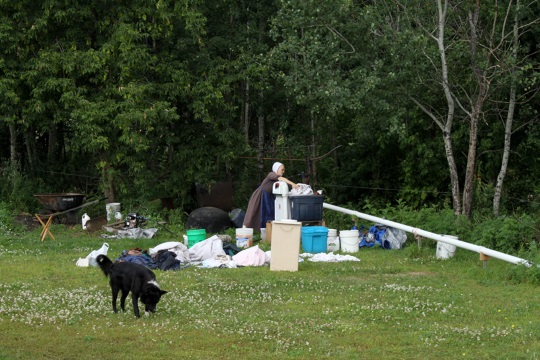 Ruth does the laundry

Sounds like light and enjoyable work for 3 women, right? While we did enjoy it, it was amazingly time consuming. The 3 of us spent about 7 hours doing nothing but laundry. And that doesn’t include folding it (that went into the next day).

One reason there was so much to do was that they have 2 in diapers right now. Imagine all those diapers needed for a whole week! I had to ask myself, “How does she do it?” I’m amazed at the difficulty of the work our tiny Ruth gets done in one day… 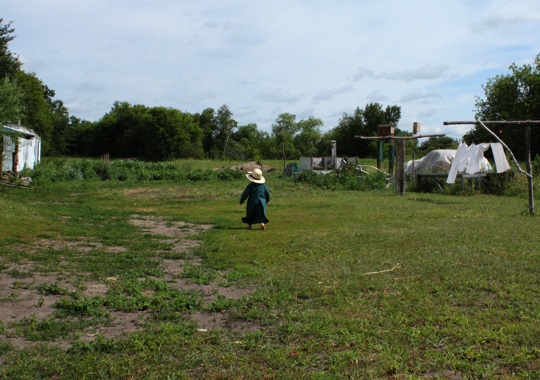 At the end of the second day my husband said he had to go get a room in town. He couldn’t stand the heat, and had not been able to sleep the night before. I went with him (gladly?) though Fiona stayed behind (this was just for one night: the weather got better slightly after this).

Fiona never had trouble with the discomfort or with sleeping either. She did, however, become frustrated at how difficult it was to live “cleanly”. We found a nearby state park that offered a shower house she used that second day. 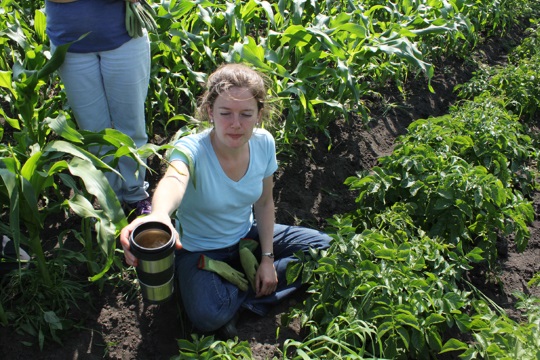 It goes without saying that we LOVED being with our sweet little family. Both grandsons are adorable and thriving. I hope to write another post just about the children of this community. Whatever else may be ahead for our bunch, we are so grateful for the wholesome way these boys are growing up.

Our visits with both Ed and Ruth were very rich and rewarding. I still can’t get over the way Ruth wants my help and suggestions. Our relationship is very unlike any other mother-in-law/daughter-in-law that I know of. Couldn’t be more grateful! 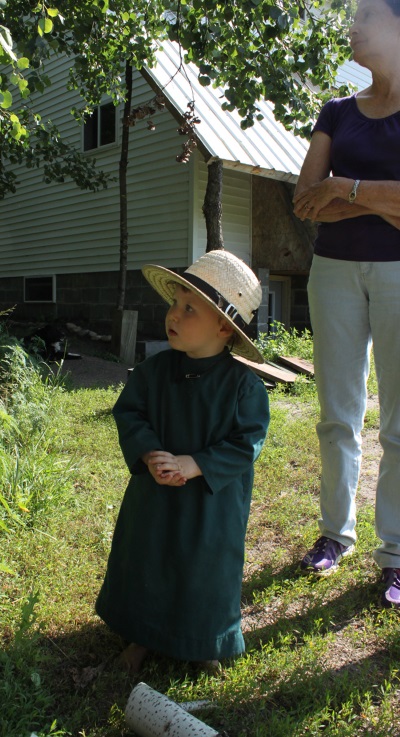 When we left, we knew we’d get a climate controlled room that night, complete with electricity and running water. But we were leaving them to continue living, what seems to us, a very difficult existence.

Though I know they are used to it, I admit to feeling like a wimp.