What’s the story behind this buggy? 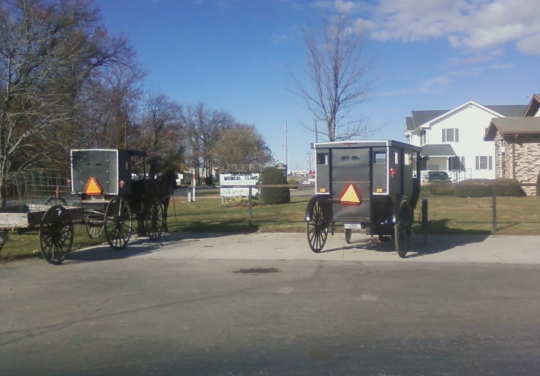 I took this picture about a month ago in Shipshewana. The surrey buggy on the right is totally different than others in the community. It was a new buggy. I showed the picture to an Amish friend and he said something to the effect of “once and a while you see things like that. Seems like it’s usually new people moving into the community who go to the buggy shop and order things the way the want.” I’m not totally sure what he was insinuating, but that’s what he said.

The surrey was extra wide with extra windows. The extra width would have required custom axles, or at least axles that were longer than the ones normally used in our community. I wondered if he checked with his bishop before he ordered that buggy.

I have never seen an Amish buggy that looks quite like this. The one on the left is in line with the standard designs you see in northern Indiana. 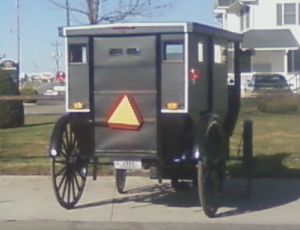 A few things crossed my mind here. One thought I had was that perhaps this is a special vehicle for a handicapped person with a wheelchair. However that doesn’t seem to explain the unusual twin rear and side windows (and I’m not sure the rest of the design makes sense).  Or is this a tourist buggy-ride carriage, making a stop at the local medical clinic for some reason?  Maybe, but odd.

The Ordnung of an individual Amish church will delineate buggy design and appearance. So it would seem a pretty bold step to order a buggy in such contrast to established church standards.

Perhaps standards have simply changed, significantly, in a church in this community.  Or maybe we should just take the Amishman’s explanation above for what it is–which could mean this buggy will get permanently parked at some point.  Any ideas?