Produce sales have become an important way for many Amish to earn a living.  Some Amish have their own stands which they often operate at the end of the lane.  Even more sell their produce to buyers at local produce auctions.

This has become especially popular in recent years among the Amish of eastern Lagrange County, Indiana, who bring their produce to a specially-built auction center east of Shipshewana.  And of course numerous Amish of ‘the Garden Spot of America’, Lancaster County, are involved in produce growing, taking their harvests to various auctions around the county. 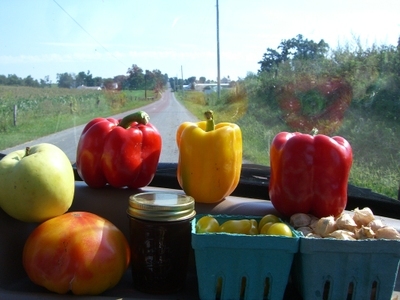 This is a dashboard shot of my take from an Amish produce stand near Berlin in Holmes County, Ohio, back in September.  Let’s have a look as we’ve got a couple oddities here that you probably won’t find at your local Wal-Mart Supercenter.

First, the bursting-at-the-seams ‘non-acid’ tomato on the lower left.  I received a few of these as a gift from a family in Lancaster County back in August.  She described them as a meatier variety.  I guess they’d be less acidic as well..?  They turned out to be the best type of tomato I’ve ever eaten–they just seemed to have a richer, heartier taste.  I became an instant fan and began seeking them out when I got to Ohio.  I first found them again at a Swartzentruber Amish produce stand waaaay at the back of a long dirt lane.  I had to eat those right away in the car, apple-style.  Yum.

Next are the so-called ‘pear tomatoes’ in the middle.  You can’t see too well from the photo, but these little guys have a distinct pear shape.  Ahh, here’s a better picture: 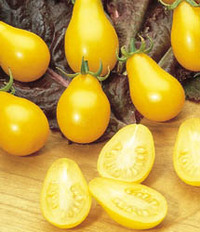 A sweet, fun-to-eat variety.  Grape tomatoes, cherry tomatoes, pear tomatoes–I am waiting for the banana tomato.  We’ll see if the Amish ag-labs can come up with something like that. 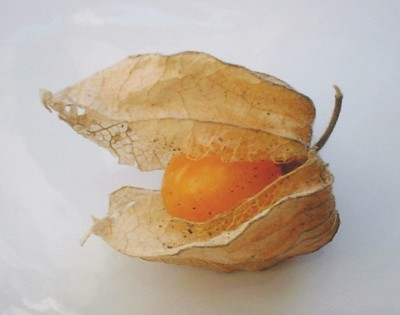 Finally we have what are known as ‘ground cherries’, aka physalis fruit.  These grow on bush-like plants which I’m guessing is where the name comes from.  You peel back the dried, parchment-like leaves, and inside is a light yellowish-orange fruit, about the same size and texture of a cherry tomato.  Very unusual taste.  I’ve had the opportunity to try these, or at least a variety of them, as garnish at a couple of fairly fancy dinners here in Krakow, Poland in the last few weeks.  They tasted the same but had longer, already retracted leaves.

So, I’ve got my mouth watering now.  Perhaps this post is caused by nostalgia for sunnier times and warmer climes.  I just glanced out the window…looks like we’ve gotten around a foot of snow in the past 24 hours.  Ack.

But I’m reminded there is a time and a season for everything,and in this case the season of canned goods is upon us.