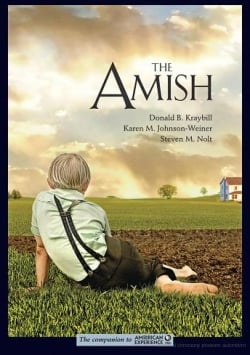 Today we have 3 winners of The Amish, the new book by Donald Kraybill, Karen Johnson-Weiner, and Steven Nolt. You’ll find the contest winners at the bottom of this post.

We also have the second part of the author Q-and-A (if you missed it, read Part 1 here). Part 2 below covers general questions on the Amish and is a sample of topics covered and expanded upon within the book.

What do Amish people do for a living?

In the past almost all Amish were farmers, but many Amish communities have experienced a dramatic occupational transformation in the past thirty years. Amish families still live in rural areas, but on average only about 30% of the households depend on farming for their primary income. Most are involved in various forms of small business, from manufacturing to construction, many of which they own and operate.

There are some 12,000 Amish businesses across North America. For the most part they are successful and profitable, despite limitations on technology. They benefit from the hard work of family labor, low overhead, a distinctive brand identity, and niche markets.

Speaking of technology, some think of the Amish as luddites or technophobes. Is this accurate?

Categorically no. Although all Amish groups regulate certain types of technology (no television, no internet access in schools or home, no ownership of motor vehicles) they selectively use technology including some that is state-of-the-art. They are careful to avoid technology that threatens the welfare of their community or that promotes individual autonomy at the expense of the group. The regulations on technology vary widely among the various Amish groups. Many Amish business owners adapt mainstream technology to make it fit within the rules of their church, for example, finding other power sources if their church forbids tapping into public utility electricity.

What is the Amish school system like and why don’t their children attend public schools?

Until the mid-20th century Amish children attended rural public schools. Parents feared that exposure to modern science, educational technology, and secular values in the public school would entice their youth to leave the Amish community. Although in a few communities Amish children still attend public school, most parents have developed their own one- or two-room private schools. Today more than 2,000 such schools, taught by Amish teachers educate Amish children through the eighth grade. Amish schools focus on reading and writing (in English) and basic arithmetic. Amish children do not attend high school or college.

Do the Amish accept modern medicine?

The Amish acceptance of modern medicine varies widely. Some of them have a family physician, seek standard medical treatment for illness, and participate as subjects in scientific studies of various diseases. Others primarily rely on traditional and homeopathic remedies and only seek medical care for serious emergencies.

Are Amish women treated like second-class citizens within their own community?

No. The Amish have a soft patriarchy in the sense that men typically represent the household to the outside world. However, in the family context women have considerable authority and freedom regarding family and household matters, and their work and their opinions matter. Although women may not serve as clergy, they are schoolteachers and owners of small businesses. They are able to vote on church matters.

Are the Amish pacifists? Do they hunt?

Yes, the Amish are conscientious objectors to war and reject the use of force (including initiating lawsuits) based on their interpretation of the teachings of Jesus. Many of them own guns and archery equipment to hunt for wildlife. They consider killing humans a sin but will kill animals for food.

As U.S. citizens, do the Amish vote and pay taxes?

Amish people pay all taxes (income, real estate, sales) except Social Security, which they consider a form of health insurance. They believe that members of the church have a duty to care for the physical and material needs of other members and thus they reject commercial and public insurance. Amish people are permitted to vote, however, the rate of voting varies from group to group and is generally low. They are forbidden by their church from holding public office.

Do the Amish use non-Amish institutions like banks, restaurants and grocery stores?

Yes. They have accounts in commercial banks, and purchase goods in local grocery stores as well as big box stores such as Walmart. Some of them eat occasionally at local restaurants, but most of them do not “eat out” on a regular basis. Amish entrepreneurs also operate many small retail stores that cater to their own people.

What exactly is Rumspringa?

Rumspringa is the time when Amish youth can “run around” and socialize with their peers away from the watchful eyes of parents. This typically occurs between the age of sixteen and when they marry, which is usually around 20-22 years of age. Rumspringa is a time to find a spouse and to decide if they want to join the Amish church and make a lifetime commitment to it. During this time youth live at home, but on weekends hang out with their friends. Most of them are not yet baptized church members, so they are not yet accountable to the rules of the church. In some communities rowdy groups engage in “worldly activities” which may include driving cars, using alcohol, and participating in the nightlife of public entertainment. In other communities these activities rarely happen during Rumspringa.

Time for the winners.  I talled all the extra social media submissions you submitted and just drew three entries using random.org.  The winners of The Amish:

Congratulations Rose, Chris and Sarah.  Send your mailing address to me and I will forward it to Johns Hopkins so you can receive your copy of The Amish.

If you didn’t win, the book is available for purchase in hard copy

at Amazon.com, or in many other venues.