Should we really beware the Amish-made label?

There’s been a good bit of media this week on the use of the Amish name to sell things. If you recall we’ve visited this question on a number of occasions, most recently in “Is it wrong to sell using the Amish name?”

One story in the Pittsburgh-Post Gazette gives us an example of the potency of the Amish tag:

In 2010, Unker’s, a homeopathic pain relief ointment company based in Worland, Wyo., was looking for a new name after it lost a trademark dispute. Founder Jerry Doerr chose to rechristen his product “Amish Origins,” complete with a logo of a horse and buggy. Mr. Doerr’s company has no direct connection to the Amish, but he claims the ointment was originally developed by an Amish man.

As a result of the name change, said Mr. Doerr, “We have almost gone viral. Our Internet orders have tripled since we started using the Amish name.” 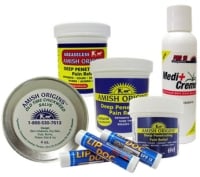 Is it ethical to execute a naming 180° like this?
In my view, if it’s true that an Amish man really came up with the original recipe, “Amish Origins” seems pretty accurate and it would be hard for me to fault Mr. Doerr.  Either way, it sounds like losing was winning in the case of Unker’s/Amish Origins.

There are more suspect examples out there. From a blog comment by Greg Miller:

There is an ongoing question with the “Amish Market” here in New York City. I can find no evidence that this is in any way connected with the Amish despite their attempts to link to Amish. As far as anyone I’ve ever spoken to this is one of those situations of trying to cash in on the name and lifestyle. If anyone knows any differently, please let me know. It is some sort of local joke that they are “Amish.” I think it’s horrid.

I’ve never been there, but have heard similar descriptions of this Manhattan outlet, and you can find more such skepticism on yelp.com.

I’ve also heard of people being told that the local Amish are so public-wary that they only do business via an exclusive dealer.  In some cases this may be accurate, but it’s important to remember that even very conservative Amish sell things directly to the public from their homes.  However it is true that some are more comfortable doing so via a third party–rather than inviting outsiders onto their property or having to deal with retail headaches.

ABC News also ran a short piece–“Beware the Amish-Made Label“–with a quote from this blog, of an Amishman who warned about the “Amish Country” loophole we’ve discussed here before.  I don’t know that we necessarily need to beware the Amish-made label, though.  There are many businesses that use the word Amish in their names which sell legitimately Amish-made products.

This is common with furniture.  For example, about half of the 30-some non-Amish retailers I’ve listed in the guide for New York Amish furniture use the word “Amish” in the names of their businesses.  And some of those that don’t may only sell a small amount of Amish furniture among an array of English manufacturers.

In the Pittsburgh Post-Gazette piece I’m quoted saying that “The Amish are aware of how their products are being marketed and aware of the appeal”….”They benefit from that.”  What I meant is that Amish manufacturers know that the English people they contract with to sell their goods are not hiding their Amish pedigree under a rock.  These retailers amplify the reach of Amish products and have played a key role in helping the Amish achieve success.  I think it’s important to recognize that while being mindful of the bad apples and grey areas–assuming Amish origins are as important to us as they’re made out to be.

I think Brad Igou makes a good point in the ABC news piece, saying that people should “do their homework”.  That’s a good rule of thumb.  If a guy with a beard, suspenders and last name Yoder takes your money in a dimly lit shop with a bunch of barefoot kiddos running around, you’re probably on the right track.  The further we separate ourselves from that scenario, the more diligent we have to be if we want to make sure what we’re buying really came from Amish hands.