His wife’s illness had been painful and prolonged. He provided her care and suffered alongside her. In those waning days of life, he rarely left her side. On a Saturday in late spring the death rattle began, and with his hand clasped tightly over hers, she slipped away. Believing as the Amish do, he hoped for her salvation but did not claim assurance. To do so would be arrogant. Yet with her body now lifeless, he found himself praying for a sign–an acknowledgment that she was at peace. 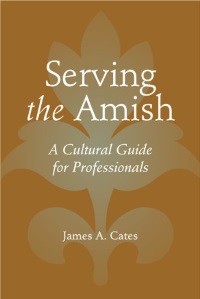 That’s from an excerpt of James Cates’ new book Serving the Amish: A Cultural Guide for Professionals. It’s taken from Chapter 8, “Death and Loss”. You’ll find the rest of the excerpt below.

A big thank-you goes out to Jim for contributing and answering our questions over this series of posts.

I thought I’d also share a list of chapter titles to give you an idea of what the book covers.

There is also an epilogue, three appendices, and additional back material.

As promised today we have a winner of Serving the Amish. Chosen at random from among your entries using random.org:

Congratulations, Scawley. Send a mailing address to me at ewesner@gmail.com to get your book.

If you didn’t win, you can find the book at Amazon

, Johns Hopkins, and other locations online and in bookstores.

Serving the Amish: An Excerpt

The following is taken from the opening of Chapter 8, “Death and Loss”.

An older parent was bringing his developmentally delayed adult daughter for a psychological assessment. Since his wife’s death, he could no longer provide the full-time care she needed and sought placement in a sheltered workshop that required documentation of her disability. I had seen grieving spouses before, but the loss in this man’s heart spoke of a love and devotion that had left him truly bereft. The story he shared confirmed my suspicion.

His wife’s illness had been painful and prolonged. He provided her care and suffered alongside her. In those waning days of life, he rarely left her side. On a Saturday in late spring the death rattle began, and with his hand clasped tightly over hers, she slipped away. Believing as the Amish do, he hoped for her salvation but did not claim assurance. To do so would be arrogant. Yet with her body now lifeless, he found himself praying for a sign–an acknowledgment that she was at peace.

The next morning an English neighbor appeared on a visit of consolation. With no awareness of the spiritual struggle this lonely man faced, the ministering neighbor described an incident that had occurred the previous night, coincidentally at the very moment of her death, and had left him in awe. “I heard such a beautiful melody,” he said. “I have no idea who was singing, but it sounded as though it came from heaven itself.” And with that remark, the grief-stricken husband knew the answer to his prayer. God had offered the song of the angels carrying his wife home.

Whether we believe in a divine breath that whispered life into the molded sand, or the slower but no less miraculous process of evolution, the exquisitely intense emotional depths of birth and death are phenomena unlike any other. Regardless of our view of what lies beyond the physical realm, these anchors at the extremes of life speak to the mystery of existence in a way that no other moments can.

Because of the power of death, every culture develops ritual means to address it. The Amish are no exception. Yet, as the vignette opening this chapter suggests, no ritual can adequately explain its personal meaning. With this awareness of the dual nature of grief as both an idiosyncratic and a shared process, embraced even more strongly in a collective society, this chapter address the experience.

There is a stoicism pervading the Amish march toward death that masks the intensity of emotions accompanying the end stage of life. At its best, a collective culture provides support and empathy in the shared experience of loss. At its worst, it suppresses deviations from expected grief. The Amish firmly believe that life in this world is a temporary sojourn. Its ultimate purpose is to claim hope for an eternity in paradise. God ordains events. Death does not occur without God’s awareness and ultimate design; therefore, to question a death is to question both the omniscience and the will of God. If it occurs due to accident, injury, or even through malice, to fail to forgive is an affront to humility and respect for God’s plan.

These are basic and inviolable tenets, grounded in the primary theology of both the Amish and fundamentalist Christianity. This pervasive understanding imparts meaning to even the most senseless and brutal deaths, as the response to the slaughter or innocent children at the Nickel Mines School demonstrates.(1) Furthermore, it provides a common bond to the family and community in times of suffering. Simultaneously, the idiosyncrasies of grief may be overlooked. An elderly woman lost two sisters in the space of a few weeks. These deaths heightened an awareness of her own mortality and poignant reality that her remaining family was dwindling. Another man lost his elderly father after a long battle with cancer. Several years later he remarked in passing that he had never been able to grieve that death. Still another woman lost a sister to a long and debilitating illness, a sibling who had left the Amish many years prior.

The rift between them was never completely healed, and the pangs of grief were sharper because of this fact. In each case, the grieving party felt comfortable sharing with an English friend. The sense of loss would have been heard by fellow Amish but potentially viewed askance. In each case the expression of grief fell outside a range of emotional experiences that could be comfortably shared within the community. Rather than risk the raised eyebrow or inquisitive tone, it was easier to remain quiet than to seek support from those to whom they were closest.

As the vignette that opens this chapter and the descriptions above imply, for the Amish no less than any other, the experience of grief can be isolated and isolating. In some ways, the cultural means of coping with death are merely an overlay. It is the human condition to be terrified of pain, of dying, and of being alone, and in moments when we face these inevitabilities, the power of the emotion overrrides all other thoughts or experiences. Yet the moment passes, and we grope for the structure of the familiar–the cultural anchors that allow us to cope with these fears and uncertainties. Still, we do well to remember that beneath the reserve and distance from the world, whether death comes in the fullness of time for an older parent or the tragic loss of a younger child, all human beings react with a rhythm culled from their own emotions.