Residents Speak Out: No Liquor Store In Shipshewana

A request to open a liquor store in the middle of Shipshewana, Indiana, the best-known town in the country’s third-largest Amish community, was rejected Thursday at a meeting of the LaGrange County Alcohol Beverage Commission. From kpcnews.com:

ABC meetings are typically somewhat quiet and last in general only a few minutes, but Thursday’s meeting lasted nearly three hours as nearly 100 Shipshewana residents packed into the Commissioner’s Chambers at the LaGrange County Office Building where the meeting was held. Almost all of those people were opposed to the idea of allowing a package liquor store to open in the center of town.

Kevin and Gurinder Khalsa, who own a small chain of package liquor stores around northern Indiana, made the request after securing a liquor license for LaGrange County. They then entered into a contract to buy the old train depot building in Shipshewana from the building’s owners, Steven and Sharron Scott-Welty. The husband and wife have owned the building for almost 40 years.

Dozens of people spoke in opposition to the proposal, saying they worried allowing a liquor store to open would somehow ruin the character and culture of Shipshewana they say so many have worked so hard to create.

“People come to Shipshewana for the experience. This is going to hurt that culture,” Lambright told the four members of the board. “People come because Shipshewana’s clean, friendly and safe, and this will ruin that. It will change the perspective of Shipshewana.

“We built Shipshewana,” he said, gesturing to others in the room. “We don’t want ruined what be built.”

At least one Amish person spoke against the idea:

“What’s the threat? It’s access,” he said. “I will tell you that the Amish youth will use that store. I guarantee you that, and that’s not what we want. There are concerned citizens in this town and we’re trying to make a difference. There will be 21-year-olds buying this stuff and they will get it to the younger folk. I’m begging you, please respect us and do not allow it. In my opinion, there’s just no place for a liquor store in Shipshewana.

Northern Indiana, like Geauga County, Ohio, also has a reputation for wild youth parties. It seems that at least some of the Amish here are trying to make alcohol harder to come by out of concern for their youth. 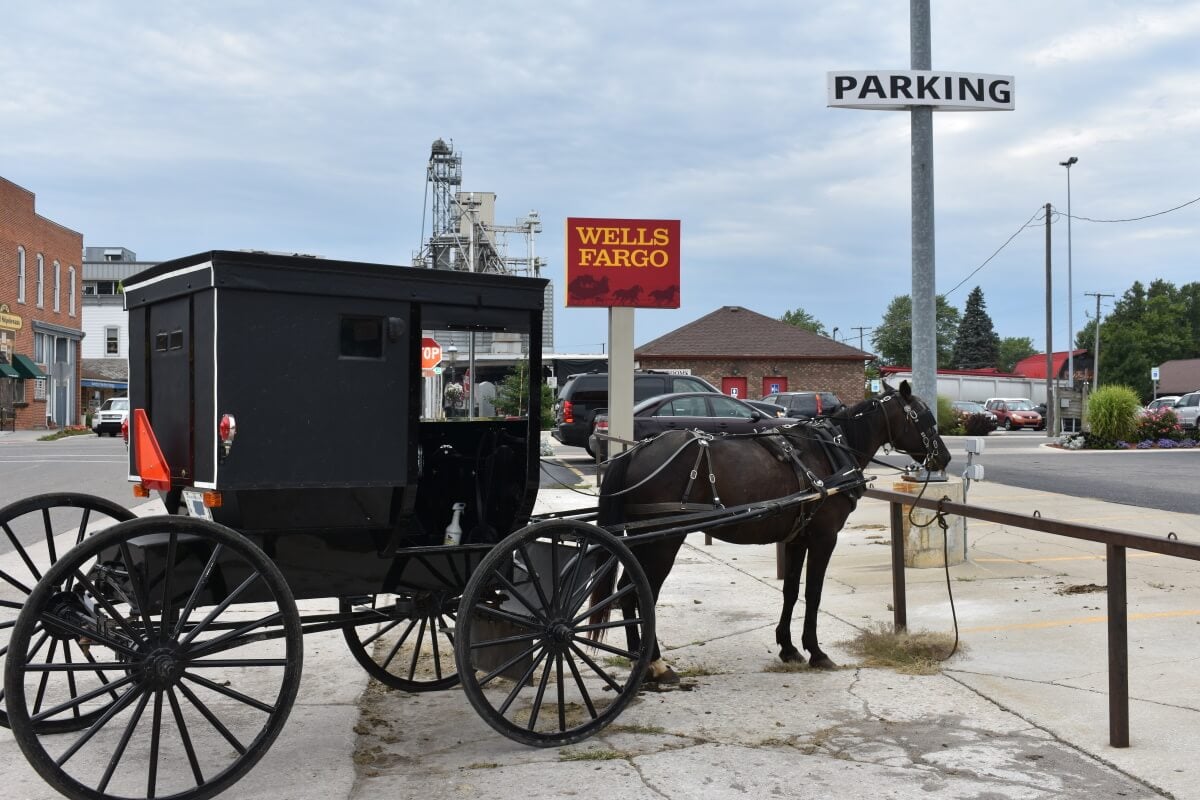 I also sympathize with the idea of not having a liquor store in the town. I don’t think it would necessarily ruin the character or bring in loads of crime. It just doesn’t fit the setting and residents simply aren’t comfortable with the idea.

Though most of the residents in town limits aren’t Amish, and it has a tourist flavor, Shipshewana has an Amish character in that Amish live all around the town and do business in it; buggies, parked at the bank or traveling its streets, are an everyday sight there. Locals who have spent their lives in the area have spoken up loudly and it looks like the liquor store will have to find a different location in the county.