It’s hard to believe that yesterday was the ten-year anniversary of the Nickel Mines school shootings. 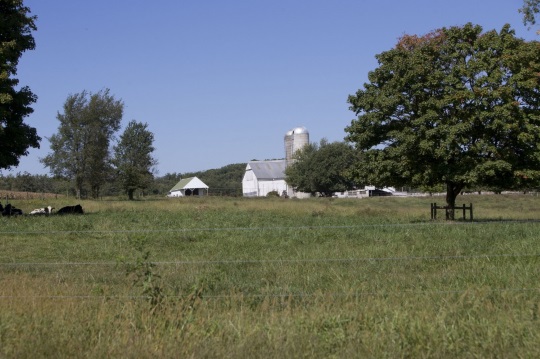 Former location of the West Nickel Mines School (Lancaster County, PA), which was torn down a week after the shootings. Photo by Mark Pynes, Pennlive

At the time, the rapid Amish response of forgiveness of the shooter resonated around the world. As the stories below attest, the healing and forgiveness process is not so simple and easy. But the Amish example provided inspiration to many.

Over the past week, media have offered various perspectives of those involved. Pennlive.com shares the words of two Amish fathers and a first responder.

Said one father who lost a daughter:

The man said he told his wife shortly after the tragedy that he couldn’t imagine any good coming out of it, only to be proven wrong over and again by the response to the massacre.

For one, the message of forgiveness overwhelmed the community and the world outside and helped start the process towards healing. The next step was forgiving, as the Lord’s Prayer teaches, and then doing it every day continuously. This exercise of constant forgiveness and choosing to forgive made the process more bearable, he said.

The families involved get together and help each other through a sense of community, so that each member has a support system. Externally, the outreach and support from non-Amish has also made a mark.

“It has opened our eyes up to see there are a lot of good people in the world,” the man said.

Another father, who lost a daughter and had a second injured:

Forgiveness takes time, however, he said. He takes issue with some of the news coverage after the shooting that followed a narrative of instantaneous forgiveness. By choosing to forgive, the Amish chose not to become bitter and started to forgive, but that process took years and years.

“If they chose to follow God’s word, look for the potential good in whatever happen and forgive who ever wronged them, then they can become better persons,” the man said. ‘If you decide that person is so evil and I can’t forgive that man, then bitter is the only thing that will continue.”

“I don’t think any of us realized how much time passed before we could say, ‘I forgive Charlie Roberts for killing my daughter,’ and mean it,” the man said, adding that it took two, maybe three, years before he could answer “yes” to this question posed by a therapist:

“Have you forgiven Charlie to the point that you truly hope that God forgave him and he is in heaven with your daughter?” the man recalled being asked at a therapy session. “I think you can forgive him without getting to that point, but if you do that, then you will be OK.”

The Amish have the same struggles as any one else, the man stresses, but a faith in God helps ease those struggles.

In the interview this man goes into greater detail in the struggles his family has had, including the effects on his other children.

One of the special relationships that developed following the shooting was between the shooter’s mother, Terri Roberts, and the Amish community. Terri recently spoke with a number of  media outlets, including ABC27, in this moving interview:

Roberts, who is suffering from terminal cancer, has written a book titled Forgiven: The Amish School Shooting, a Mother’s Love, and a Story of Remarkable Grace.

In an article for the Washington Post, Roberts discusses the special relationship that developed between her and the most severely injured girl, Rosanna King:

Several months later, Roberts had all the women back to her home for a tea — a gathering that’s now become an annual tradition. As she played again with Rosanna, she asked the girl’s mother if she might help care for her. In the intervening years, Roberts spent nearly every Thursday evening at the King family’s farm, bathing, reading and attending to Rosanna until her bedtime. After the first couple of visits, Roberts said, she would cry uncontrollably the entire drive home, overwhelmed by the reality that this little girl was severely handicapped because of her son.

That’s not lost on Rosanna’s father, either. There’s never an evening that Roberts is there visiting that Christ King doesn’t think of what her son did, but he said it never changes the goodwill he feels toward her.

“I will never forget the devastation caused by my son,” says the 65-year-old Terri. “But one of the fathers the other night, he said, ‘None of us would have ever chosen this. But the relationships that we have built through it, you can’t put a price on that.’ “

“And their choice to allow life to move forward was quite a healing balm for us,” she says. “And I think it’s a message the world needs.”

Survivors of the shooting have their own trauma to deal with. Aaron Esh Jr., at age 13, was the oldest boy in the classroom the morning of the shootings:

Aaron’s trauma is less visible. Since the morning of the shooting, when he and the other boys ran for help, he’s struggled with crippling anxiety over his guilt that as the oldest boy in the class, he didn’t protect the girls. Even when a state trooper assured him there was nothing he could have done, it took a long time for him to forgive himself.

He started overeating, and when he gained weight rapidly, he stopped eating, eventually having to be hospitalized for anorexia.

At the picnic in 2007, Roberts knew Aaron was suffering, which made it all the more moving when, at the end of the party, he told her he’d had fun.

Since then, she’s developed a special affection for Aaron, a quiet, contemplative man. He traveled with her to Ohio where she gave a talk about her story. In her presence, he found his voice, getting up with her to share his experience. But he hasn’t really been able to share since.

Finally, in this story for Religion News Service, one Amish father shared a message for others dealing with loss:

Amish couples have traveled to towns affected by other school shootings, including Newtown, Conn., and Blacksburg, Va., the sites of two other mass shootings. “We’ve reached out and that was always a blessing,” said the father. “The best general message I could give to anyone is to actively seek God’s help because faith is very important.”

“If there is someone who is struggling from the loss of a child, spouse or parents, the most important thing is to talk to someone about it,” he added. “Find someone you trust, because bottling it up inside causes bitterness and bitterness brings hatred.”

Though he says he’s sure that the shootings weren’t part of God’s plan, “this is something he permitted as a way to get his name recognized in ways that might not have happened otherwise,” he concluded. “That’s as much as my human mind understands, and a thought I’ve become comfortable with.”