William Woys Weaver is a food historian who has written extensively on Pennsylvania Dutch food and culture.  He’s written a new book called As American As Shoofly Pie: The Foodlore and Fakelore of Pennsylvania Dutch Cuisine.  From an NPR article on the subject: 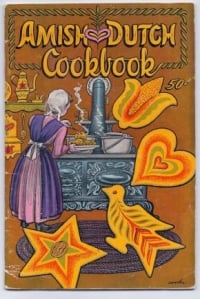 News flash: Whoopie pies are not indigenous Pennsylvania Dutch food, no matter what the tourist traps say. Nor are the seafood bisque, chili, roast beef and other dishes crowding the steam tables at tourist restaurants in Lancaster County, Pa.

Instead, how about some gumbis, a casserole of shredded cabbage, meat, dried fruit and onions? Or some gribble, bits of toasted pasta akin to couscous? Or some schnitz-un-gnepp: stewed dried apples, ham hocks and dumplings?

I don’t know, that all sounds pretty tasty to me. As for the Pennsylvania Dutch people, only a minority were Amish: 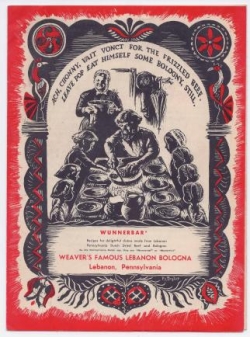 Some were Lutherans, some Anabaptists, some Mennonites. Some were rich enough to eat hasenpfeffer, rabbit braised in wine. Some were “buckwheat Dutch,” so poor they rarely ate meat and got by on “hairy” dumplings, made with shredded potatoes that stuck out when the dumplings were boiled.

“Because they were poor, they had to be creative,” Weaver says. “They were eating ramps. They were eating wild asparagus. They were eating huckleberries. Of course, the Victorians wanted everything in white sauce and looked down their noses at [that food]. But we can see it as something very close to the land.”

It’s interesting how the popular view of both the Pennsylvania Dutch people and food is shaped by servings of the culture heavily flavored by the Amish.

The article has some excellent images of old cookbooks, advertisements and tourist brochures featuring romanticized Amish and Pennsylvania Dutch imagery.

Anyone for hairy dumplings?